The history of Passementarie is hard to follow. The term itself can mean so many different things: braids, cording, ribbons, tassels, gimp, fringe and more. There is evidence of Passementarie in ancient Egyptian tomb paintings and in ancient Chinese, Japanese and Roman legends as well.

Some historians think that elaborate braided Passementarie were the beginnings of Bobbin Lace. Most European countries have history of a different era where both clothing and interior decorating were embellished with Passementarie according to the fashion of the time and place.

During the Middle Ages and beyond in Europe, there were guilds for Passementarie shops and it was considered an art form (as is the handmade Passementarie of today) requiring years of apprenticeship. Long trims were executed on pillows (like lacemaking) or with complex hand-operated machinery. To see many technical illustrations from Diderot & d'Alembert's Encyclopedia (18th century) regarding Passementarie, click here.

In a previous post I told you about a Passementarie shop that I went into in Florence, where they make a lot of what they sell by hand. Here are only a couple of tassels that I got there.

I use this one as a scissor fob: 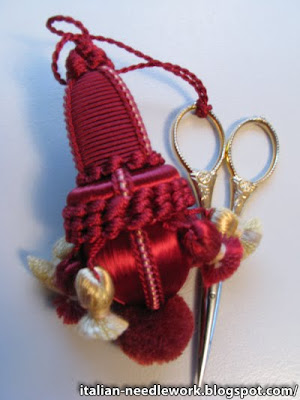 And this one for my clothes dresser handle: 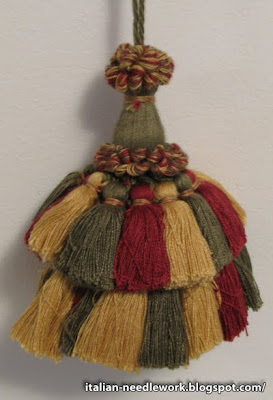 Not the best photos, I seem to be very shaky today, but you get the idea of the intricacy of the work.

There are still many Passementarie shops in Italy and it's fun to check them out as they are full of all manner of trimmings which, if you are fortunate, are handmade and therefore so much more interesting than the coldness of the machine-made stuff. It takes a certain talent with colour and design to make beautiful Passementarie.

While searching for something else, I happened upon a Facebook page which is open for non-Facebook members (I know because I don't belong to Facebook) called Il punto Milano: sapresti farlo? [The Milan Stitch: would you know how to do it?]

For those who don't speak Italian, it says:
"The Milan stitch is a type of needle made braid generally used in passementarie to cover (in silk or cotton) the head of tassels (see photo) but also buttons, accessories and weapons, the name probably comes from here (as the production of competition weapons was one of the principle industries of Milan).
Widely used in the 18th century, counting the numerous [extant] examples from the first half of the following century, it then slowly fell into disuse and we completely lose the technique.
This group is formed with the precise intent of recovering that technique. Anyone who has news or knows enthusiasts and experts in the field of passementarie is asked to put them in contact with this group or me via email.
In the photos are also a few pages of a French book on passementarie in which a similar stitch is shown and explained.
Anyone - an enthusiast of braiding - who would like to try to figure out the technique of the 'Milan Stitch' from those instructions and is successful will have eternal gratitude and a substantial reward.

p.s.
Unidentified sources claim that certain Berber tribes from Morocco cover buttons with a braiding that is similar to the 'Milan Stitch'. Research of this lead is made all the more difficult as these are nomadic tribes. Therefore, on one hand it is difficult to trace them and on the other hand, if you did have such luck [as to find them] you would have to follow them across the desert in order to have them teach you the technique, with all the linguistic and logistic difficulties involved."

Since this post was left on April 16, 2009, no one seems to have helped this group achieve their goal. What do you think? Can anyone help?
Posted by Jeanine in Canada at 2:21 PM