If you are anywhere near Milan before the end of this month and want to see some fantastic goldwork embroidery from 15th century Florence when it was at its height of splendor, you should head off to the Poldi Pezzoli Museum.

There you will find the hood of a cope executed from a cartoon by Botticelli (c.1480s) as part of a collection of liturgical vestments commissioned most probably by King John II of Portugal. The Portugese ambassador to Florence at the time, Cardinal James of Lusitania died in Florence in 1459 and was buried at the San Miniato al Monte Basilica of Florence. Great expense went into building and decorating the Chapel for the Cardinal and some of Florence's leading artists at the time contributed to the artwork and its construction.

The hood of this cope is done in silk shaded goldwork embroidery. Florence was well known for excellency in this technique as I told you about previously. The design is the Coronation of the Virgin. Information on it from the museum says "...is absolutely the most beautiful embroidery that has been handed down to us executed on the design of the artist."

Check out the details on the folds of this angel's robe (click on the photos for a closer look): 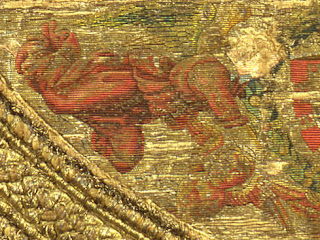 And the pattern designs on this architectural representation: 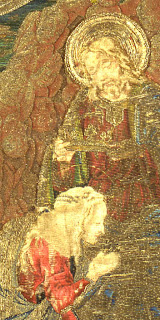 The exhibit: Botticelli in the Lombard Collections is to mark the 500th anniversary of the artist's death in 1510 and has been on display since this past November.

Photos courtesy of the Poldi Pezzoli Museum and are subject to copyright. They can be downloaded from the Museum's website and used only to promote the exhibit.

Thanks to Linda for making me look!

This exhibit has been extended until the 25th of March, 2011!
Posted by Jeanine in Canada at 9:22 PM