Lace Exhibit at the Met Museum in New York 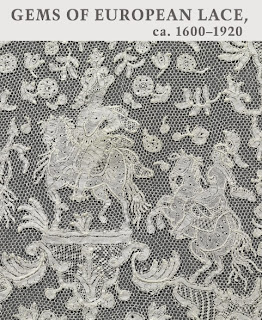 If you find yourself anywhere near the Metropolitan Museum of Art in New York before January 13, 2013, check out their Gems of European Lace exhibit at the Antonio Ratti Textile Centre!

Taken from the press release:


Included in the installation are examples of the two major lacemaking techniques: needle lace (built up from a single thread that is worked in a variety of looping, or buttonhole, stitches) and bobbin lace (woven—or braided—together from multiple threads organized on individual bobbins). Beyond the two basic technical categories, lace is also often described with the name of the town or region where a particular style was first made. The exhibition will include outstanding examples of Venetian (needle) lace, Brussels (bobbin) lace, and Devon (bobbin) lace. Of particular interest is a 19th-century handkerchief associated with King Leopold II and Queen Marie-Henriette of Belgium. The queen was a patron of the local lace industry.


There is also a lovely filet lace dress which belonged to the early 20th century American socialite Rita de Acosta Lydig an avid collector whose pieces formed the basis for the Costume Institute at the Met.

Two Italian examples in the exhibit are from the Nuttall Collection, donated by Magdalena Nuttall in 1908. You can read more about this collection by downloading the Bulletin of the Metropolitan Museum of Art, 1908.

A special thank you to Sarah for the info about this event!
Posted by Jeanine in Canada at 9:13 AM