For those who enjoy a good story to go along with your needlework, check out the Nov/Dec 2012 issue of Piecework magazine: 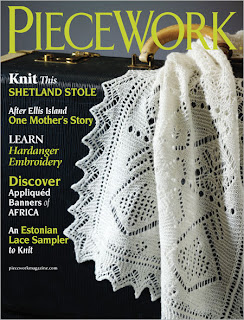 Inside you will find the story of the Scuola d'Industrie Italiane of New York by Ivana Palomba.

Some of you may remember me telling you about Ivana's thesis being published last year on Carolina Amari and her impact on the emancipation of women. This article tells of the school/workshop that Carolina Amari and Florence Colgate started in 1905 in New York for italian immigrant girls as a means to earn a living without having to work in a sweatshop or factory.

While translating this article I have to say that I was fascinated by the lives of the women we tried to research and found it immensely frustrating to be so far from New York and all the archives that are there. If you have an ancestor who was a student of the Scuola d'Industrie Italiane of New York. I would love to hear from you!


As Piecework required a project to accompany the article, there is a Punto Antico needlebook inspired by a card case featured in an advertisement for the Scuola D'Industrie Italiane from The Journal, November 1908.

I hope to have more news early in the new year regarding the Scuola D'Industrie Italiane of New York, so keep an eye out for further developments!

Posted by Jeanine in Canada at 4:54 PM