Fabric and thread shops in Rome


I spent seven glorious days in Rome the first week of this past October with friends who live on the outskirts of the city. The first day after arriving from the airport, we headed out to celebrate our visit with a gelato. That was it, no big plans, it was late afternoon and I'd been up some 24 hours or more.

To get to the gelateria, you must pass a merceria which is a shop which carries embroidery threads, fabrics, buttons, ribbons, sewing notions and the like. We decided to stop in just for a minute... 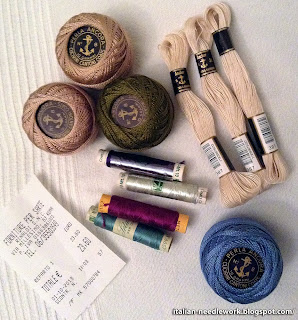 I swear I only wanted to get the no. 30 coton a broder thread!
But then there was a table with discontinued Anchor threads on sale. I couldn't let that silk just sit there, or the pearl cotton either. After we had rung up the purchase, the clerk told us that he also had discontinued colours of Anchor coton a broder no. 25 on sale too... 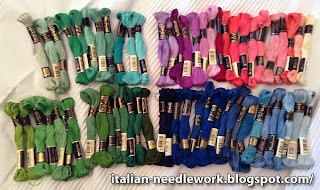 ... so we had to go back the next day. Luckily I had my iPod with my list of what I already have at home, even though in the end if I'd taken one of everything I would have only ended up with a couple of duplicates. Needless to say, we had a delightful time going through all the drawers filled with threads.

This merceria as I said is on the outskirts of Rome but in the case that you might be nearby on one of your travels to Italy, the store is in Via Millesimo no. 53 in the suburb called Torrevecchia.

A couple of days later we headed into the centre of Rome to see some newly restored silk and gold embroidered vestments at the Church of St. Francis a Ripa Grande. Along the way from the bus stop in Piazza Venezia to where we took the street car to Trastevere, we walked through the section of town where there are some textile-related stores.


We stopped in at the Paganini fabric store which is a huge place with 14 window displays. They have been around since 1948 and carry all kinds of fabrics and rugs. You can see some photos of the inside of the store here. 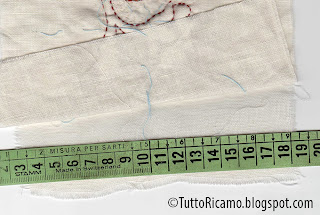 I bought some "cencio della nonna" which is a linen gauze (11 threads per centimetre) for backing Trapunto. You can see it on the back of Silvana Vannini's Trapunto project here.

From there we headed to the Merceria Alfis in Largo Ginnasi no. 6 where (among the threads and other textile things) they have a large selection of buttons.

Check out my previous post for more shops in Rome. Do you have a favorite textile-related store in Rome? Leave a comment below!

Posted by Jeanine in Canada at 3:51 PM