Last April when I was in Bologna, I got to attend a trade fair called Mondo Creativo [Creative World]. There was some embroidery and lace, lots of quilting and beading, decoupage, ceramics, jewellery making, felting, knitting, crochet, cake decorating and all kinds of do-it-yourself crafts that you'd expect at a fair of this kind. You can watch some video coverage of it here.

It was quite crowded and I walked around and around, going up and down the aisles trying to take it all in. I was there for a few hours and it was getting close to the end of the day when I reached the farthest corner of the vast space and discovered a booth full of the most wondrous Macramè. 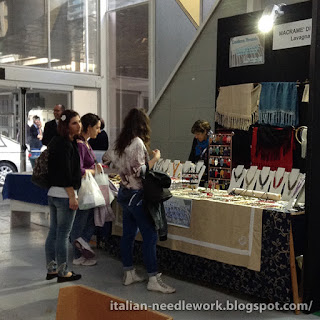 I've told you in previous posts about the Macramè of Italy and how it's not anything like what North Americans usually think of. What I saw in this booth would take your breath away.

The lady demonstrating was Luciana Brescia and I got to talk to her for a bit. She told me about the type of Macramè she was doing which is a style local to the area where she lives, it is called Chiavari. 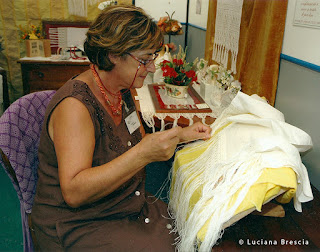 Chiavari is a small town a bit to the south of Genoa on the north-western coast of Italy. It is said that Macramè has been produced in the area for more than 700 years. It is traditionally used to ornament household and ecclesiastical linens and Luciana showed me the linen she uses that is locally woven especially for embellishment in macramè. 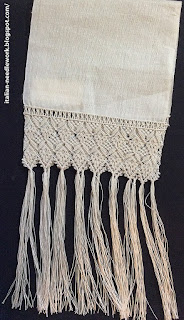 I couldn't resist getting a guest towel made of the special linen, worked in Chiavari Macramè by Luciana in a typical pattern called Fieschi. 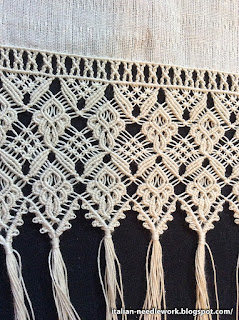 The linen is called: grana di riso [grain of rice] and is handwoven by the deMartini family in nearby Lorsica.

Luciana has been perfecting this art for nearly 40 years. She is very proud to have made a towel that was presented to Pope John Paul II in 1998 when he visited the historic deMartini weaving studio in Lorsica.

Luciana teaches courses in her hometown and exhibits at the various trade shows around Italy. While she likes to make traditional items, she also makes more modern applications such as earrings, brooches, bookmarks and decorations. Her table of goods kept me enthralled for quite awhile and it was very difficult to make a choice for my purchase.

I also picked up a kit with instructions to make a flower assembled of individual petals and Luciana told me to go to a booth at the show where I would find some waxed cotton thread that would be good for me to practise with. I'll let you know how it goes!