Many things from Italian needlework have become know to the English-speaking world in bits and pieces. For example, Assisi Embroidery is well known, but the rolled hem and small tassels which generally finish off an Assisi Embroidery piece done in Italy are almost never seen outside of the country.

The same holds true for Palestrina embroidery. It's relatively easy to find English instructions on how to do the Palestrina Knot, but nothing is said about where it comes from or what type of embroidery it traditionally goes with. 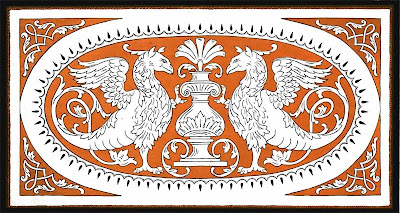 This delicious pattern is from an old RAKAM magazine from the early 1930s. It's for a cushion measuring 80 cm x 45 cm, done on Assisi linen (28ct). The magazine recommends No. 3 or 5 Pearl cotton thread if making this design into a tablerunner or finer Pearl Cotton if making a cushion.

Traditional Palestrina Embroidery uses the Rush Stitch (Punto Stuoia) for filling in the background. Rush Stitch resembles Romanian Couching Stitch but the couching stitches are executed more randomly to achieve the effect of the way rushes looked when used as floor covering in the ancient houses of Italy.

Colour combinations recommended are: porcelain blue for the filling/dark brown for the outlines, gold/bronze-green, antique purple-red or Pompeii red/old gold.

There is a bit of history I translated into English from a website that unfortunately exists no longer:

This embroidery is named after a town in the Latium (Lazio) region called Palestrina, the ancient Praeneste, near Rome.

According to some, the origin of this embroidery dates back to the second century AD. More certain is the fact that in Palestrina in 1907, the "School of ancient embroidery - Ars Palestrina" was founded by the Marquis of Florence Alfredo Uliveri. The school, located on the first floor of the Palazzo Barberini, executed various kinds of embroidery from ancient stitches and in particular Palestrina Embroidery, "invented" by the founder of the school.

Some years later in 1919, once again in Palestrina, Luigi Croce opened a workshop which didn't close its doors until 1969. The workshop reproduced Italian masterpieces (of Perugino, Raphael, Byzantine depictions, etc...). The trademark of this workshop was to execute the drawings on white fabric, leaving the motifs empty and filling in the background with the needle.

The Palestrina Knot is suitable for lines, outlines and curved designs. It is executed from left to right, forming a series of knots, close together or farther apart, giving a raised effect to the work. The background is filled with Rush Stitch and needlewoven picots are used to finish the edges along the hem. Twisted cotton thread or pearl cotton is used on natural coloured fabric to produce the best effect.

If you can find it, Adele della Porta wrote a booklet on this technique in 1919 or there is Palestrina artigiana e rurale by Attilio Borzi, Editrice I.T.L. Palestrina, 1979.

Posted by Jeanine in Canada at 4:34 PM