In 1878 Romeyne Robert was born in New Jersey to American parents who traveled quite a bit and during a visit to Rome met her future husband the marquis Ruggero Ranieri di Sorbello.

Soon after their marriage in 1902, the couple settled in to live at the 17th century Palazzo Sorbello in Perugia. This breathtaking palazzo is worth a visit as it houses important collections of paintings, prints, pottery, embroideries and one of Italy's most important libraries of rare texts.

Marquess Romeyne felt a strong desire to help the country folk on her family's estates and set up a Montessori school (which, at the time, was a brand new teaching method) for children where she also initiated sewing and embroidery lessons for women.

The success of these classes brought about the establishment in 1904 of an embroidery workshop called "Scuola Ricami Ranieri di Sorbello" [Ranieri di Sorbello Embroidery School] which she based on one of the Ranieri family estates called the Villa Pischiello near Lake Trasimeno in the province of Perugia.

Starting with 8 employees, the workshop counted near to 150 employees at its peak of popularity and enjoyed success until 1934. A co-operative named "Arti Decorativi Italiane" [Decorative Italian Arts] was started and opened a shop in the city of Perugia to sell the products of textile, lace and embroidery workshops from the surrounding area and even from a little farther away in the other regions of Italy.

Together with Carolina Amari an extraordinarily talented needlewoman from Florence, the Marquess Romeyne developed the technique of Punto Umbro [Umbrian Embroidery], also known as Sorbello Embroidery and Pischiello Embroidery, from antique pieces in the personal collection of the Countess Edith Bronson Rucellai of Florence.

The cover of an undated brochure on the technique reads as follows:
"The Punto Umbro is the revival of an ancient and forgotten Arab stitch used in Italian, Spanish and Portuguese embroideries. It was discovered among some of the rare needlework in the fine collection of Countess Edith Rucellai. The stitch was deciphered, copied, and applied to renaissance Italian designs, through the ability of Signorina Carolina Amari of Florence, and has become the specialty of the school of embroidery founded, organized and directed at Pischiello, Passignano, by the Marquess Ranieri di Sorbello for the benefit of the women on her husband's estate and neighboring towns bordering the historic Lake Trasimeno, Umbria."

An excellent book on the history relating to this technique and it's founders is Ricami della Bell'Epoca published by the Uguccione Ranieri di Sorbello Foundation with articles by noted textile scholars Maria Luciana Buseghin and Iolanda Silvestri. Most of the text is in Italian but there are some bits in English and also some summaries of the essays in English at the end. There are lots of photos of Italian embroideries, laces and textiles. The cover art gives you an idea of the embroidery technique Punto Umbro: 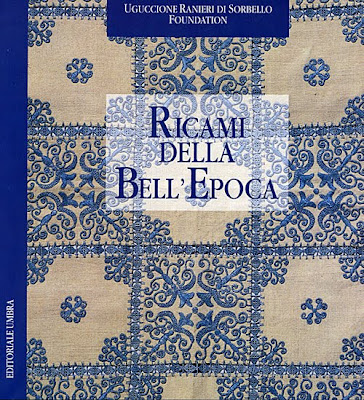 Next time we will go into detail on the technique of Punto Umbro and talk about what is happening today to continue the tradition of this fascinating needlework and one of the particularly talented associations called P.Es.Co. For now, whet your appetite by checking out their photo galleries.

Posted by Jeanine in Canada at 9:12 AM