To celebrate the 20th anniversary of the Reggio Ricama Cultural Club there will be an exhibit of the best of their member's embroideries from the past 20 years from the 20th of November until the 8th of December 2010 at the Reggio Emilia Diocesan Museum. (Reggio nell'Emilia is between Bologna and Parma in the central northern part of Italy.)

To mark the occasion they have published their fourth book, Canusino Embroidery over 20 years of Reggio Ricama. I hope it will showcase the pieces in the exhibit but I won't know for sure until I get my hands on it, I'll be sure to let you know! 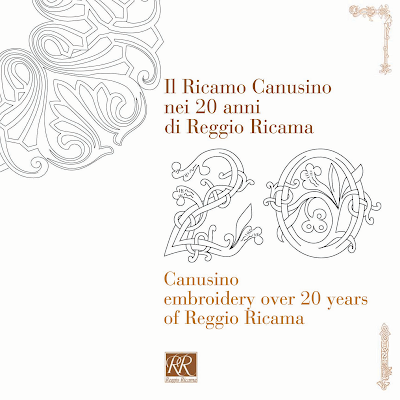 As the title of the book is in two languages, I am assuming that the book is too, though it doesn't say on their website.

You can see some examples of Reggio Ricama's needlework at a show in 2009 here.

Lots of the Reggio Ricama work has been showcased in Italian needlework magazines like Ricamo Italiano and RAKAM over the years. Pieces I would delight to see up close!

I told you a bit about Ars Canusina in this post here. It is a very textural and stylized embroidery with designs inspired from architectural details from the castle of the Great Countess Matilda of Canossa and the churches of the surrounding area. If you want some interesting reading (in English) on the Countess, David John Hay's thesis is available for download in pdf format here.

At the Reggio Ricama exhibition will also be about 50 pieces from the famous Loretta Caponi collection, though it is not specified if these pieces will be clothing or embroidery, I hope it's a bit of both. If you check out the show, will you write and tell me about it?
Posted by Jeanine in Canada at 6:32 PM