Ivana Palomba and her thesis

For several months I have been trying to figure out the best way to tell you about a very important book which was published last spring in Italy entitled: L'arte ricamata. Uno strumento di emancipazione femminile nell'opera di Carolina Amari [Embroidered Art. An instrument in the emancipation of women in the works of Carolina Amari] by Ivana Palomba. 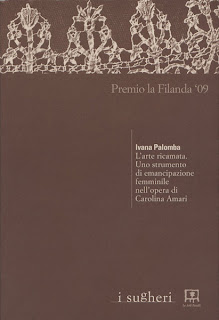 This book is the thesis written by Ivana Palomba for her degree in History and the Protection of Art Heritage, which she has achieved later in her life, returning to complete her studies and fulfilling her dreams which were interrupted by life as we can all understand happens especially often to women.

The publication of her thesis was a prize she won from the Associazione Le Arti Tessili [The Textile Arts Association], which now forms a part of the series of titles published on the Textile Arts by scholars with the aim of bringing to light Textile Culture and it's contribution to history, the arts and/or handicrafts.

The importance of this book is difficult to understand if you don't have much historical background. Anyone who has done any research on the textile arts and especially on women's positions in the textile arts knows that historical sources are very difficult to come by. Women in general were not traditionally mentioned or counted in data that was collected by historians, their lives, if recorded at all, were often recorded only with regard to their position to the men in their lives. This book is the fruit of many years dedicated to digging up any information available about one of Italy's most important women in the world of the textile arts at the end of the 19th and beginning of the 20th century: Carolina Amari.

As Ivana says in her introduction: "the aim of this thesis is not only to return to Carolina Amari the honors of those arts to which she gave a new dignity between the end of the 1800s and the begining of the 1900s, but also to re-evaluate the work focalizing it as a lever of women's emancipation".

Almost nothing was known about Carolina Amari, yet she was instrumental in so many important institutions and organizations for women in Italy and also in the United States (more on that later!).

There will be a special presentation of this book on December 3rd at the headquarters of the Associazione Le Arti Tessili at No. 4 Via Carso in Maniago, Pordenone, (in north-eastern Italy) at 11am followed by the inauguration of the headquarters at noon to be immediately followed by an Open House with lots of textile-related activities.

The book can be purchased directly from the Associazione Le Arti Tessili.
Posted by Jeanine in Canada at 1:34 PM