The ladies of the association "I Merletti di Antonilla Cantelli" have released some more patterns from the boxes that they have from the needlework workshop of Sacro Cuore (early 20th century) in Bologna.

This set of presents for us is in celebration of the New Year and features a photo of some of the teachers of the needlework workshop of Sacro Cuore, one of the most talented groups doing Aemilia Ars needle lace at the time. There are 14 pages of patterns to download. The ladies answer your requests for more simple patterns. 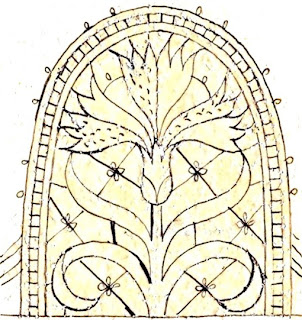 There are also some anecdotes about some of the historical pieces and people of this beautiful lace including the sad story of Nella Grassini Errera and her husband Paolo, prominent Venetian citizens taken and deported to Auschwitz where they were executed in 1944.

If you're like me and can't get enough pictures of Aemilia Ars needle lace, make yourself a cuppa and check out the photos that the Fondazione Cassa di Risparmio of Bologna has published on the Genus Bononiae website.

Many patterns from a 17th century book of designs by Bartolomeo Danieli were the inspiration for breathtaking pieces of needle lace made in the early days of the Aemilia Ars Society. The CalcoGRAFICA National Graphics Istitute has recently made some of Danieli's designs available on their website.

To download the Christmas presents that the ladies from "I Merletti di Antonilla Cantelli" gave us in December of 2011, click here.
Posted by Jeanine in Canada at 3:35 PM