Some weeks ago, I received an email from Anna Rondelli of the Embroidery Association La Prilletta in Bologna.

She asked me to take a look at her website and her work.

You should too! There are photos of exquisitely delicate traditional embroidery techniques done with the utmost care and finesse. Traditional embroidery stitches like raised and padded satin stitch, shadow work, Broderie Anglais, needlepainting, cut work and drawn thread work are just some of the techniques used on fabrics like silk, organdy and fine Italian linens. 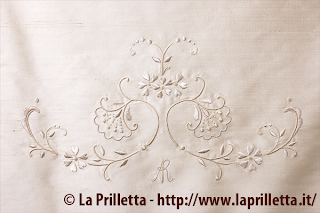 The aim of the Association La Prilletta is to rediscover and make known classic embroidery executed using a hoop which enjoyed its heyday in Bologna between the end of the 1800s and the early part of the 1900s. Anna has some of her grandmother's and great-grandmothers patterns and embroideries which she uses for inspiration along with some published designs from the period. 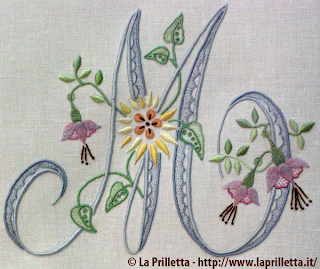 Taking their inspiration from pieces found in family trousseaux, the Association La Prilletta works to make this embroidery technique relevant to our modern times while being faithful to its past. They practise it so it will not be lost over time and in the hopes of enriching all those who encounter it with the beauty of this embroidery.

Anna herself spent 10 years learning from Vilma, a Bolognese embroidery master who attended the famous embroidery school headquartered at the Sacro Cuore Sanctuary in Bologna. This famous workshop was also renowned for the pieces of exqusite Aemilia Ars needlelace that it produced in the early 20th century.

The Association La Prilletta is currently working towards their first exhibition which will fall in September of 2012 in Bologna, watch their website for more details.

They offer classes in these beautiful embroidery techniques and a few didactic booklets, go to their website for more info.
Posted by Jeanine in Canada at 2:54 PM