I received a lovely little book called Mani Álacri as a gift and I was curious about it's author Lidia Morelli. I did a little a research, and as it usually does, one thing leads to another and another and pretty soon what I thought would be a nice subject for a quick post turns into something you could write a good long article on. 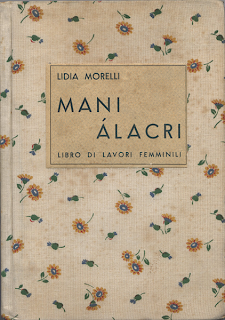 First things first, the book. Mani Álacri is small little hardcover book with a cloth cover like they used to do, the dedication page is dated December 1933. Mani Álacri translates literally to "lively hands", the subtitle Libro di Lavori Femminili is the "book of feminine works". There were several different cover designs for this volume, here are a couple of other ones: 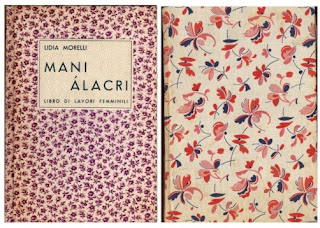 In the introduction, the author states that before writing this manual, she took a close look at the others which had come before and found that while there were lots of magazines and pattern books, there wasn't much in the way of a real and proper manual which offered technical instructions. She does quite well in just under 500 pages to provide just that. She also stresses that it is very important to teach children these techniques and that the young mind is more capable than people give it credit for. There are mostly black and white photos but there are the occasional colour plates as was normal for books of the period.

In her illustrations I like that she shows how to hold the needle: 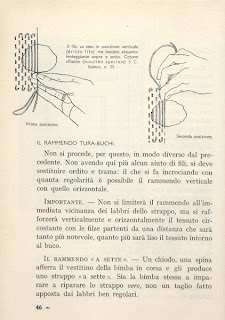 There are photos in this volume of Italian embroideries as well as traditional embroideries which are well-known to other countries but especially for the Italian works, the photos are of pieces I haven't seen in other books.

As always I am fascinated by the women behind these things.

Lidia Morelli was born in Turin on the 10th of June, 1871 to Efisio Morelli and Vittoria Ceresole Morelli and died February 7, 1946. As far as I can tell she had two brothers, Ennio and Dario and three sisters, Ifigenia, Alda and Dora. Her brother Ennio became quite a well-known artist. She graduated at 18 as a teacher and pursued Linguistics and Literature going on to become a writer and a journalist. In 1895 she won a teaching competition. Her earlier books were written under the pen name of Donna Clara. I don't have a complete list of all her writing, but here are some of the items that we found:

Lidia Morelli wrote articles for the Italian newspaper La Stampa. Her books were updated and reprinted many times over her long and active publishing career. She wrote for the architectural magazine La Casa Bella (which became Casabella) on Parma Embroidery and Petit Point among other topics.


Together with Elisa Ricci, Lidia Morelli wrote the section on Embroidery for the Italian Enciclopedia Treccani.

No evidence yet of a husband or children but the dedication page in my copy of Mani Álacri is a sad note to a dear "Cecilia" who seems to have died as a child. It seems to indicate that Cecilia was a niece who enjoyed needlework.

On the Italian Giornalism and History website there is a small paragraph about her:


"A little closed, a little reserved, a highly educated and sincerely modest woman, the soul of an artist and essentially feminine, a ready intellect to critique and tempered by an infinite goodness" (F. Sacchetti Parvis, 1929). Ms. Morelli made the first steps in the field of publishing for women in 1905 with the volume Dalla cucina al salotto [From the kitchen to the livingroom]. In the thirties she was at the centre of an unquestionable success that even included the radio (G. Isola, Abbassa la tua radio, per favor [Please turn down your radio]. Florence, 1990, pg. 112).

It looks like Lidia Morelli did more than one radio show or segment. I looked up the above-quoted text on GoogleBooks but I can only see a snippet which mentions Radio Torino, a radio station in Turin, and Radiocorriere, a weekly program publication for the RAI broadcasting company.

There is so much more research to do and I'll update when we find out more.

A tremendous thankyou to Bianca Rosa who did lots of research for me during the snowstorms in Bologna this past winter!!!
Posted by Jeanine in Canada at 2:25 PM