Whitework Sampler in the Palazzo Davanzati


There is an Italian whitework sampler in the Palazzo Davanzati Museum collection which haunts me.

I have never seen the whole thing up close as it is displayed all folded up in one of the glass cases in the embroidery and lace room on the first floor.


There is a photo of it all opened up in the museum catalogue entitled: Merletti a Palazzo Davanzati - Manifatture europee dal XVI al XX secolo, edited by Marina Carmignani, 1981, page 53. On the preceding page there is a brief paragraph which I will translate here:

33. Italy, end of the XIX - beginning of the XX century
Sampler on white linen of needlework stitches
50 x 70 cm
Inv. Stoffe 1338
G.F.S. 293283
A series of stitches reproduced in the style of the second half of the XVI century: pulled stitches, drawn-thread stitches, reticello, satin stitch embroidery. The sampler is probably 19th century and falls into the vast production inspired by the 16th century Italian pattern books, revived from pattern books by Pagani, Vinciolo and Vecellio, back in vogue between the end of the XIX century and the beginning of the 20th century, of which Aemilia Ars was among the most famous and perfect interpreters.


I take as many photos of it as I can whenever I'm there. I'm totally fascinated by the wide range of work that is on it.

The name Laviniana appears at the top. Who was she? How old was she when she did this? Was it meant as her resume? Perhaps that is not even the stitcher's name, perhaps it means something else? Oh the things I want to know!

Close up photos show a rather rustic work: 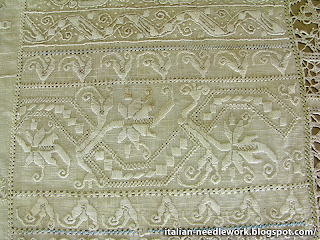 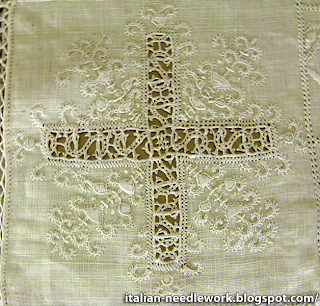 But there is also a lot of skill shown on this sampler. Unfortunately my photos of the reticello work are far too blurry to be of use.

There are some religious symbols as well, just under the name:

... and there are little people in the needle lace: 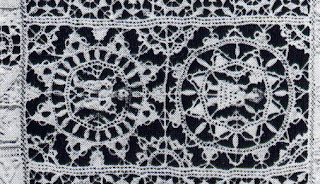 She has fingers! (click on the image for a closer look)

To study this sampler properly I'd have to brush up on my symbolism and bible study as well as my needlework. I want to see the back of the work. I want to study it with a magnifying glass, with needle and thread in hand. I want detailed close-up macro photos!

Most of all I want to be in Florence at the Palazzo Davanzati!