Though I have told you many things about my trip to the Italia Invita Forum in May 2011 in posts about Puncetto, Deruta Drawn-Threadwork, Ars Panicalensis, and Sicilian Drawn-Threadwork, I didn't really tell you much about the Forum itself.

The theme for the 2011 Italia Invita Textile Forum was: Herbarium. Each exhibitor was asked to create a "herbal" themed piece using their favourite technique. As always, competitions of this kind produce extraordinary things and the exhibit of entries was fascinating. Here are just a few entries which are all photographed and can be seen in the catalogue:

The umbrella of textile arts this time included weaving, quilting, knitting, crochet, felting and cross stitching added to the original embroidery and lace of years before. This was the 5th biennial event which started in 2003.

The Italia Invita Forum 2011 also coincided with Italy's 150th anniversary celebrations so one of the contests of this Forum was to stitch the flag or use the flag's colours. There was also a contest for quilts! So much to do and see, the Italia Invita Forum was divided over two paddocks, the contest entries in one building and the vendors and textile exhibitors in another.

Others took better photos than I, so if you're ready for some eye-candy, sit back and check out these blogs and personal websites of people that were there:


There were even a couple of YouTube videos produced:


This should give you a good idea of what the Italia Invita Forum is like. There were visitors from all over Europe, Japan, North America, Australia. 46 Textile Schools of Italy were represented by stands of their own but there were even more in mini-stands combined with commercial goods in the vendors section. There were 104 vendors including the four event sponsors: DMC; Fratelli Graziano, Juki and HFT-Filomania. The DMC booth had some of their pieces from the 2009 exhibit which were the stitched designs from their old booklets from the beginning of the 20th century. You can see some photos on their Italian blog:
http://www.dmcblog.it/?p=1024
and more detailed photos of the whole DMC collection here: http://www.dmcblog.it/?p=357

Fratelli Graziano had their first weaving loom threaded up with the colours of the Italian flag as they were celebrating their 170th anniversary (check this link for some photos). Overall there were 150 exhibitors. 8,754 people attended the Forum over three days (May 13-15, 2011) attendance was up 14% over 2009. 17 of Italy's 20 regions were represented with local characteristic textile techniques.

I brought a better camera this time (last time my camera mysteriously stopped working the night before the Forum and started working again the day after it was over) but my photos where not great. Even the automatic movement stability feature couldn't stop my shakiness - too much excitement! This is very unfortunate because many exhibitors were kind enough to let me photograph their things. I wish I had good photos to show you but unfortunately I do not.

Some photos did turn out. Gilda Cefariello Grosso creates wonderful things with colourful Pisan Embroidery and wins many awards with her work: 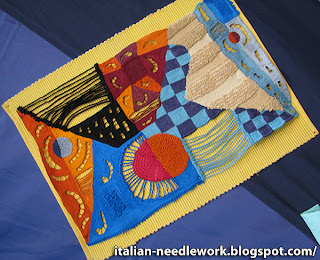 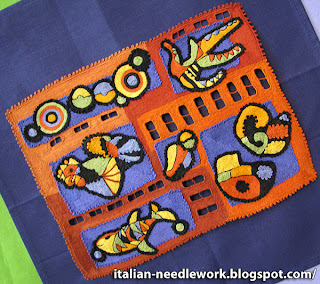 The Italia Invita Forum offered workshops both free and paid. This time I opted for a paid workshop and took an intensive Puncetto course which I told you about here. There were many others I would have liked very much to have taken, 10 in total: embroidery techniques, filet lace, bobbin lace, needle lace, macramè, crochet lace, tassel-making and weaving. Two were Sardinian techniques that I have never before seen classes offered to the public. It was hard for me to choose which course to take but in the end I chose the Puncetto as I had already made some attempts at it and knew that I would like to improve.

From previous experience I knew that the days would be hectic and exhausting but exhilarating as well. Meeting up with old friends and making new ones in an atmosphere where most of us felt like kids in a candy shop makes for an amazing three days. There are meetings and appointments and gatherings where everyone excitedly goes over purchases and experiences. I will be sad to miss the Italia Invita Forum in 2013. Finances will not allow a trip to Italy next year for me, but if you have the chance to go, you should do it!

So far details are scarce on their website but as soon as they can, I know they will announce everything. They do know that those of us who must plan for trips in advance are out here waiting for news! 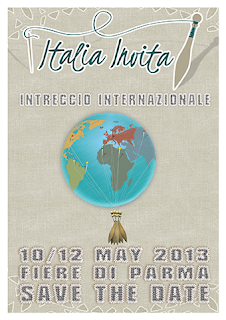 Check over the other editions to the Forum that I have talked about:

Posted by Jeanine in Canada at 2:29 PM