If I had some extra money to spend, I would hunt down a series of encyclopedias on the History of Costumes in Italy [Storia del costume in Italia] published between 1964 and 1969 by Treccani, written by Rosita Levi Pisetzky. There are, I believe, five volumes which are broken down as follows:

Every once in awhile a complete collection comes up for sale on ebay like this leather-bound edition: 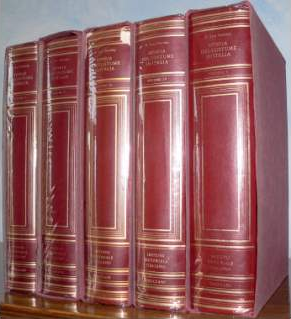 In the Burlington Magazine Vol. 112, No. 807, June 1970 there is an enthusiastic and extensive review (in English) of the encyclopedia set by E. H. Ramsden.

While I can't get my hands on this body of work, I did find another book by Rosita Levi Pisetzky called Il Costume e La Moda nella Società Italiana [Costume and Fashion in Italian Society], 1978 Giulio Einaudi Editore. 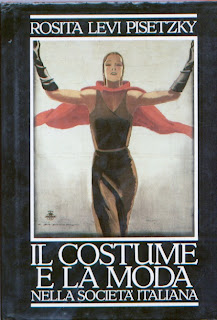 It totals 383 pages and includes a detailed index. The book is divided into two sections, Le forme della moda [The Shapes of Fashion] and Il costume nella storia [Costume in History]. Each section is then further divided into subsections covering periods from Roman times up to 1900.

I like that it is specifically about Italy and Italian fashion and clothing and it makes me want the series of encyclopedias I mentioned above all the more.

In the single volume that I have is a middle section of mostly black and white photos of statues and painted works of mostly Italian examples of clothing and accessories throughout the period covered by the text.

It is full of interesting topics like the symbolism of colour, the origins and names of fabrics and particular attention is paid to accessories. Very useful for those who are recreating period costumes.

I have been completely unsuccessful at finding out anything about the author herself. On the back cover flap of the book that I have it says: She devoted constant attention and passion to the problems of the history of fashion and costume in her Milan and Italy. Among her numerous works are: La Storia del Costume in Italia, Il Gusto Barocco nell'Abbigliamento, Storia del Fazzoletto, Come vestivano i Milanesi. [...] She died in 1985.

I also accessed an online edition of a magazine called "Quaderni grigionitaliani", Volume 16, 1946-47, which has a five poems by Rosita Levi Pisetzky. The footnote after her name says she was an italian refugee and passed many years in Roverado di Mesolcina (Switzerland?) and that she had already contributed poems and tales to the magazine. A quick search of the database however produced no results for her name at all, not even the one in Volume 16.

I'm thinking that her name suggests she may have been Jewish and if she was from Milan, she will have had to flee during WWII but I will have to do more research as this is only a theory. I would love to know the story of her life and what led her to produce this amazing body of work on Italian fashion and costume. If you know anything further I'd love to hear from you!

Posted by Jeanine in Canada at 7:09 PM