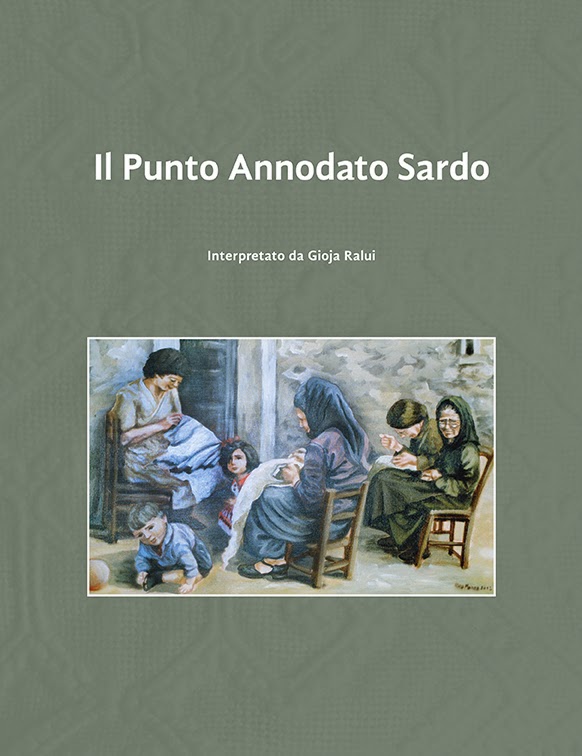 I can finally tell you about one of the projects that I've been working away on... for nearly the past four years! The result of intense study, research and lots and lots of blood, sweat and tears: Il Punto Annodato Sardo (Sardinian Knotted Stitch) is an instructional manual on the little-known needlework technique called Punt'e nù which comes from Teulada in southern Sardinia, a large Italian island off the western coast of Italy.


This book is the collaborative effort of four stitchers who set out to learn more about this beautiful needlework found traditionally on men's folk costumes from Teulada. The back cover above shows a close-up of the richly embroidered collar and below you can see the cuff of a man's traditional folk costume shirt.

The book is intended as a beginner's approach to the needlework. As Punt'e nù has traditionally been local to Teulada and handed down by word-of-mouth there is very little written about it. Even Sardinians who live outside of Teulada only get to see it in some museums or on the costumes during religious festivals or on the rare occasion of an artisan exhibition.

There is a group in Teulada now who has been working to bring this and other embroidery typical of the area to light with needlework shows exhibiting non-traditional pieces adorned with Punt'e nù like towels, tablecloths and other household and personal linens. For more information about this group and/or visiting Teulada and seeing this work, contact the owner of this blog.

The book Il Punto Annodato Sardo is 70 pages and covers some historical background along with technical instructions, some traditional patterns and then a few non-traditional projects.

It is available on amazon.it (and other amazon websites) but this first version is written in Italian. Very shortly there will be an English version and I'll keep you up-to-date when that is finished and available.

I must get back to work!

UPDATE: here is a review in Italian for those that would like it, and another one here. Also there are now quite a few reviews (in Italian) on the amazon.it website page for the book.