The other day a beautiful photo meant for someone else came across my newsfeed which sparked a revisit for me to the Turk's Head Knot and tassels. For me its not the bright and shiny things that distract me, its the textile textural things... and Deruta beads... 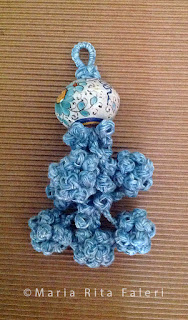 Exceptional isn't it? It's creator is Maria Rita Faleri and she lives in Fermo in the Marche region of Italy which is located near the eastern coastline, pretty much in the middle of Italy: a little north of Rome, a little south of Florence.

Now, I knew a little bit about her and we've corresponded a couple of times about other things over the years and I told you about her wonderful Tassel book here. We started chatting about the tassel above and then another... 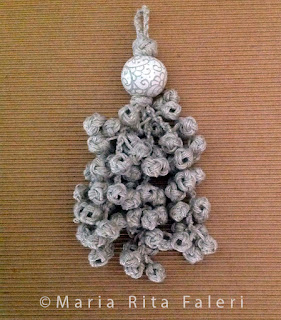 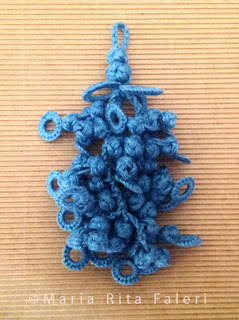 I mentioned that I had abandoned the Turk's Head knot which is what those little knots are and she helped me discover where I had gone wrong. I love the internet. She was nearly 9000 kilometres away and 9 hours ahead in time difference but within a few quick comments of a chat, she had made the lightbulb go on in my head.

There is absolutely nothing wrong with the instructions in her book, it was me that missed an important step. Looking at them now, they make perfect sense.

We started to chat about other things. Maria Rita is part of a cultural association in Fermo called Il Filo Che Conta (a little play on words: the thread that counts) where she teaches (among other techniques) Catherine de' Medici embroidery and knotted tassels. She edited the book on Catherine de' Medici embroidery that you'll find when you follow this link. She also wrote a book on marking stitches called Punti di Marca a few years ago.

Maria Rita told me that she will have a booth at the Abilmente trade show in Vicenza, Italy this October. It's one of the fairs that I'd love to go to one day, I really need to plan to be in Italy one autumn. Her booth is under her association's name: Il Filo Che Conta and you can find it in the Embroidery Salon area. She will have her books and materials for Catherine de' Medici embroidery, Bobbin Lacemaking and of course Tassels! Maria Rita will be there for demonstrations and she has made new kits for the three tassels you see above plus this one: 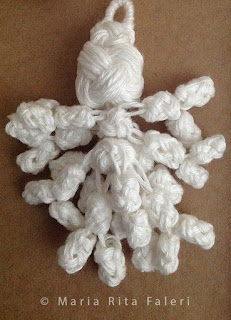 And also this adorable little bunch of grapes: 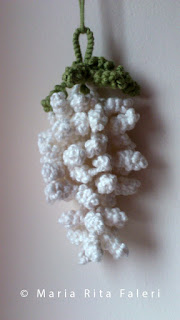 Inside the kits are the instructions, needle and threads plus two sizes of tiny wooden sticks which help in the execution of the knots. I want them all! Maria Rita tells me that this fair Abilmente is the only one she exhibits at and what she earns during the show helps keep her cultural association afloat.

Here is a report from a previous Abilmente show in 2012 where you can see some of Maria Rita's beautiful tassels displayed absolutely marvellously:


If you are in Italy and go to Abilmente, please leave a comment below and tell us how it was. Drop by the Il Filo Che Conta booth and say hello to Maria Rita for me...

Posted by Jeanine in Canada at 2:37 PM