For a few years I have been looking on and off for some idea of what kind of knots make up the tassels on my vintage Punto Umbro cushion that I talked about here.

The tassel is made up of a needle lace covered head with 20 little knots covering the top part and five legs which each have 18 of the same little knots on them. 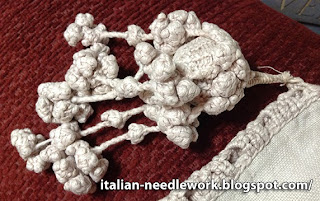 I've been to thread stores in Italy and asked lots of people. Everyone who had an idea, I tried out with no real success. Always close but not exact.

Recently while looking up something else (as usually happens with research) I stumbled across a photo of something pretty close to my tassel in Rosalba Pepi & Maria Rita Faleri's lovely book on Tassels. Who knows why I didn't notice it before.

Anyway, I started looking seriously through knot books and online.

I made a few different types of knots in paracord first... 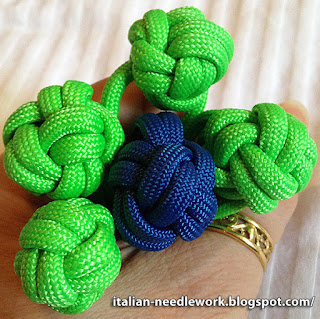 Then a few in cotone povero cotton yarn... 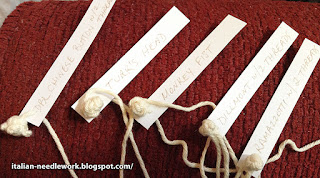 I like the Turk's Head knot but it was a bit too round and I also liked the Monkey Fist Knot but it didn't have enough facets.

This is a close up of the head of my tassel with all it's little knots: 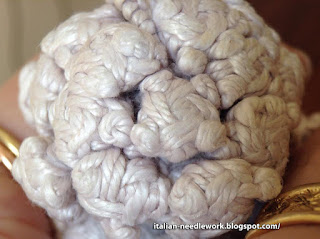 Then I thought: am I making this too complicated? This tassel was made near the beginning of the 20th century - what was available to embroiderers then? There is one knot explained in the DMC Encyclopedia (scroll down to the bottom) and one in the Italian Book of Women's Work which I showed you here. I tried them both. They were the closest yet to mine.

Still, they took me some time to work and the thought of taking an hour to make each knot when I had 92 to make motivated me to investigate YouTube, now that I had the name "Chinese Knot" at least to reference. Well, I lost a few days watching YouTube videos but I finally settled on Suzen Millodot's Double Chinese Button Knot tied on a single cord because it's pretty close and because it's relatively easy. I won't know for sure until I get better at making the knot.

I added the French knots as picots in the four corners of the bottom like the ones on my tassel and I'd say that with some practise, I could be happy with these.

Here's a bottom view for comparison:


Now, I really liked the Monkey Fist knot with picots too but that will be for a tassel not related to this one. I show you a photo of a single and then a group of four knotted together just in case you might like to make some for yourself!

If you know what knot it really is on my tassel, will you leave a comment below and let me know?

Posted by Jeanine in Canada at 3:06 PM