I have an old E. Frette & Co. catalogue. I don't know how old it is, but in it there are designs for monograms and ciphers with prices in Lire. I suppose when ordering your household linens from the firm, you picked out the designs you wanted embroidered on you sheets, towels, etc. It is a fabulous source of inspiration and a little peek at the price of embroidery in what I figure to be the early 20th century. I will place a couple of scans of designs throughout the following history of this Italian company which celebrates it's 150th anniversary this year. The prices are preceded by a capital letter "L" and then the price in bold. I wish I knew the date of the catalogue so I could guess at price conversion to today's prices but it's difficult to say - however it seems very little!

In December of 1860 a household linen manufacturer and distributor by the name of Frette, Payre & Chaboud was founded in Grenoble, France situated at the foot of the French Alps.

In 1865 two manufacturing plants were opened in Concorezza, Italy near Monza which produced luxury linens on Jacquard looms. You can see some early 20th centuries photos at the Concorezza Archive website. (clicking on the photos will get more information and bigger photos.) These locations are still active today.

In 1878 the first retail store opened in Milan. It is still there today, located across the street from the Poldi Pezzoli Museum. 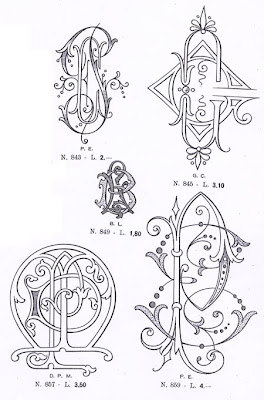 Between 1879 and 1881 the firm underwent some restructuring and was renamed E. Frette & Co. becoming also at this time the suppliers of fine linens to the Italian Royal Family and many other noble families, embassies and the Ministry of Foreign Affairs to whom they still supply today. New looms called Vicenzi looms were developed which enabled the firm to weave complex Jacquard linen Damask fabric. In 1881 the company took a gold medal at the National Exhibition in Milan for a Jacquard linen picture called La Vega. The work was based on a painting of the first ship to circumnavigate Europe and reach the arctic by Francesco Lietti.

In 1886 the firm started to market outside of Italy and started catalogue sales of their products and 1899 saw the company begin to supply the worlds luxury hotels with linens starting with the Royal Danieli in Venice.

They signed contracts to supply the world's luxury oceanliners in 1911 which included outfitting the dining room on the Titanic. Their linens are still used today on the Orient Express.

After the First World War, E. Frette & Co. was one of only three companies which remained active in Concorezza out of 13 before the war.

In 1926 they started the trend of putting art on their catalogue covers.

They opened stores in London and New York in the 1970s and the late 1980s saw a new line of linens for luxury yachts.

Expansion into Asia started in the late 1990s. The descendants of the company founders ceded ownership to an Italian fashion group and it becomes known as Frette. Into the 2000s the company expanded into silk, brocade, cashmere and fur bedding and opened an online store for the US market. Today it is owned by JHP a San Francisco based company. 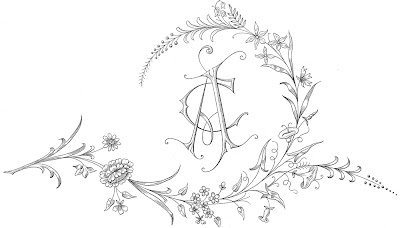 2010 marks the 150th anniversary of the company. They held an exhibit in Milan this year until May 2nd which then moved to Singapore for the 2010 Expo. You can see some photos of the exhibit on their Facebook Group.
Posted by Jeanine in Canada at 2:28 PM