Let's have a little colour today. While in Assisi last year I photographed this sign outside a shop, thinking excitedly that it was a store selling Deruta Embroideries (which is what it says) but alas, inside there were touristy things and books – the shop clerk said that during the 1950s it was the shop I was hoping for. 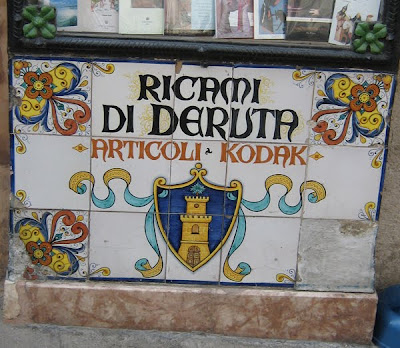 I do know however, that Coloured Deruta Embroideries do exist and that they are still being stitched today.

As is the case in many instances, embroideries were initiated to match tablewear or were inspired by ceramic tiles. Deruta is especially known for its outstanding ceramics worldwide. The colours fascinate me and I find myself drawn to ochre, terracotta, green and blue - if you looked at my collection of threads you'd find that anytime I had to buy some kind of thread just to bring it home without any special project in mind, these are the colours I chose.

This work was featured on an Italian telephone card for Telecom Italia in 2009: 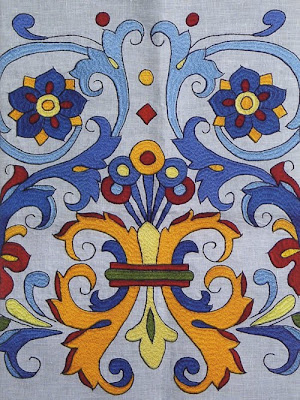 There is a 4 minute video on YouTube of the Fili d'Amore presentation ceremony in which you can see some of the embroideries and fuserole which were also featured on telephone cards. (Make sure you watch it in 720pHD!)

Embroidery in Deruta dates back to the 13th century but in the early 20th century it experienced a revival with the national movement of "Feminine Industries" which popped up all over the country promoting special styles and stitches from each region of Italy. Embroidery schools and workshops were started in Deruta by nuns and a pair of local sisters, Aurelia and Luce Corcioni which experienced worldwide success in the selling of their beautiful needlework. Local ceramic beads called fuserole were incorporated into the tassels on their cushions, curtains and tablemats.

These are some of my fuserole, purchased at both Italia Invita Forums in 2007 and 2009: 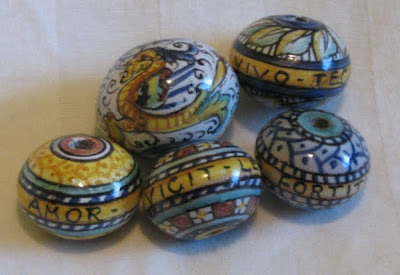 Fuserole started out as the weights to balance spindles when spinning thread and date back to Etruscan times. Between the 14th and 17th centuries they were glazed, coloured and decorated with sayings and good wishes, names or virtuous designs and were given as love tokens. This one is a reproduction of a 15th century fuseruola: 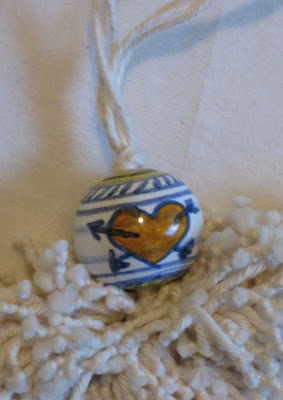 Modern Coloured Deruta Embroidery is made using Long and Short Stitch and Stem Stitch and sometimes Rush Stitch as well (which is similar to Roumanian Couching).

From the Italia Invita 2009 Forum book: 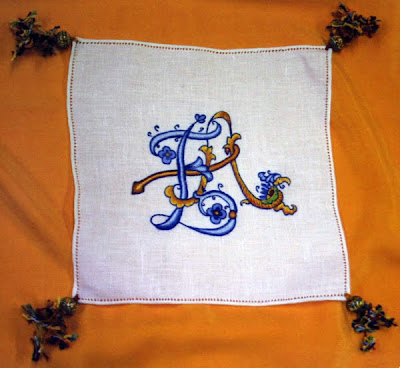 There are some free patterns to download at the Italian Embroidery magazine Ricamo Italiano's website, all text is in Italian: here and here.
Posted by Jeanine in Canada at 12:31 PM