Some of the best places to see needlework when you're traveling is in religious buildings. There are usually excellent examples of the best needlework as historically the Church had money to spend and the habit of conserving their embroideries well.

The Basilica of San Francesco in Bologna is no exception, when we walked into the 13th century building I was immediately struck by a stunning Goldwork altarcloth: 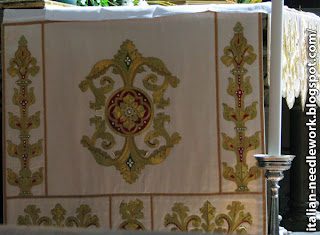 This altarcloth was a work of particular magnificence, utilizing many of the techniques and materials of Goldwork embroidery. It was so incredible and so well executed! If Goldwork interests you and you're in Bologna, don't miss the opportunity to study this piece!

There was also a lot of other needlework on display in the Basilica, like cutwork and needlelace but we'll look at those another time.
Posted by Jeanine in Canada at 5:22 PM