Margarete Naumann was born in Chemnitz, which is near Dresden in Germany in 1881. She invented and then taught what is known as Margarete lace in the early years of the twentieth century.

You can learn more about Margarete Naumann and her lace at this website.

What I want to tell you about is the Italian interpretation of this exquisite form of Macramé because as I've told you previously, I love the Italian approach to this art which most North Americans turn their noses up at remembering plant holders and other items of the '70s made of rough jute and hemp.

I first noticed Adriana Lazzari's work in a book that I didn't buy at the time (and still regret) called Natale Macramé which had little figures for a Nativity scene made of Macramé. She caught my attention again with a book on little Macramé angels and then I was struck hard by the cover of her latest book and knew I could fight no longer, I had to have it! 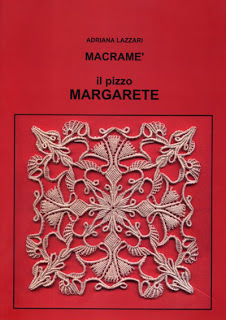 "Margarete lace - what is it?
It is a particular lace that derives from traditional macramé, invented at the beginning of the 1900s by Margarete Naumann and patented as "Margaretenspitze". She wanted to break the bonds of the rigid knotting patterns of the time creating a particular way of making lace. This "new" technique allows one to develop the work in all directions, making both flat and three dimensional elements. You don't need designs or patterns because, with knowledge of the basic rules you can compose the lace according to your own creativity. Gathering the threads into bundles and gradually letting them out, using simple, double, triple, quadruple and multiple knots, adding and subtracting threads during the working you have the possibility of designing modules or elements for custom making a lace personalized to your own imagination.

......... A few years ago I discovered this particular lace, studying and elaborating it and now I want to pass it on to you through this book.

Here you will find the instructions for starting from the basics and arriving little by little to making more and more elaborate and complicated laces.

I hope with this, my work, to revive this old and forgotten but always wonderful technique."

The book is just under 85 pages long and the text is in Italian but there are lots of step-by-step photos and while I have not yet had a chance to try anything (I just got it!) I would venture to say that if you already have a good working knowledge of Macramé, you may have little trouble figuring it out. There are 15 projects of increasing difficulty the last of which is the design on the cover.

This book is available at Tombolo Disegni, look under the Libri/Books section and then under Libri/Macramé – send an email request to order.
Posted by Jeanine in Canada at 8:58 PM