For those who are part of the Embroiderers' Association of Canada (EAC), the new winter 2011 edition of their magazine Embroidery Canada is being delivered right now and inside is an article I wrote on Catherine De' Medici Embroidery with a Placemat project designed by the Accademia Punto Assisi. 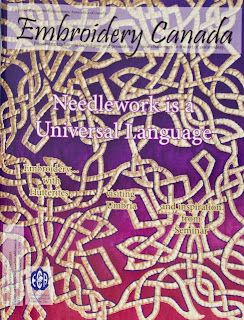 I wrote this article in 2009 and am sad to report that the little store I visited in Assisi that I talk about in the article has since closed its doors. However the Accademia Punto Assisi is still going stronger than ever!

This is my own attempt at Catherine De' Medici Embroidery or Punto Madama: 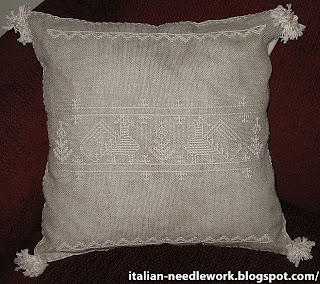 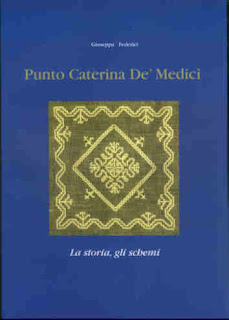 The peacock pattern can also be found in the Nov/Dec 2010 Piecework magazine with my accompanying article. 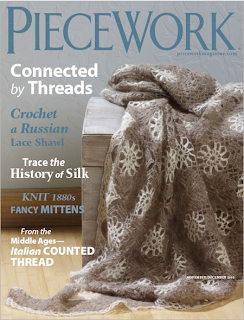 Caterina De'Medici Embroidery is a counted thread technique and is usually worked on an Italian fabric known as Buratto which today is a 100% loosely woven evenweave linen about 6 threads per centimetre (15 threads per inch), either cream coloured or unbleached (read more on Buratto here).

Edge treatments can be widely spaced Blanket Stitches or a double crochet edge with popcorn picots on a small hem. Knotted tassels in a variety of styles are almost always the finishing touch. Sometimes colourful hand-painted ceramic beads from Deruta are added.

Here is some Caterina De'Medici Embroidery done by the Accademia Punto Assisi exhibited at the EGA San Francisco National Seminar in 2010: 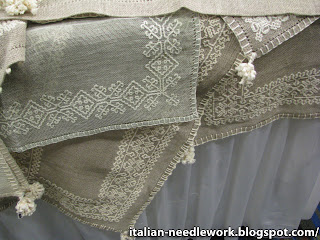