Orvieto is situated in the central part of Italy in the Umbria region. I wrote a little about it here. Umbria is rich in needlework techniques and history. The town of Orvieto is best known for it's crochet lace.

The following is a translation of the history page on the Ars duemme website:

The lace of Orvieto was born at the end of the 19th century and in June of 1907 a patronage society for the women of Orvieto was founded with the aim of offering the town's women the opportunity to earn a modest income while occupying their spare time in a decent and not overly strenuous way.
The idea was launched by Senator Count Eugenio Faina and was realized by his son Claudio, who gave the first funds to his daughter Maria Vittoria and to the noblewomen Eugenia Petrangeli and Pauline Valentini, who occupied themselves with coming up with a simple but also remarkable technique, that women could produce at home.
The choice fell on the lace that was made with Irish thread which, as well as having artistically impressive effects, presented a technical level suitable for dividing a single artifact among workers. Right from the beginning, the lace took on the typical characteristics of Orvieto both from a decorative and execution point of view. In fact, the decorative motifs of the lace reproduce designs of leaves, ivy, acanthus and vine, flowers, animals and figures taken from the fourteenth-century bas-reliefs of the facade of the Orvieto Cathedral.
The patronage society was called Ars Wetana, which testifies to the artistic level and the local peculiarities expressed in the artifacts.

The Ars duemme workshop in Orvieto is run by a mother-daughter team who produce exquisite Orvieto Crochet Lace items and also run classes in this technique.

First the individual crochet lace motifs are made against the design traced on a piece of fabric and then they are attached together with a crocheted hexagonal netting in various stages and sizes. When the work is detatched from the fabric, it is then ironed in a particular way. The is the most curious thing I find about this lace is how the bas-relief is achieved: with heated iron pieces! Of course it's quite tricky to find the balance between how much you can distort the work without scorching or ruining it but the bas-relief is quite prominent as you can see from the following photos which were taken at the EGA National Seminar in 2010, when Umbrian needlewomen visited to show us Umbrian needlework and textiles. 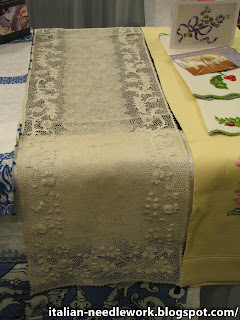 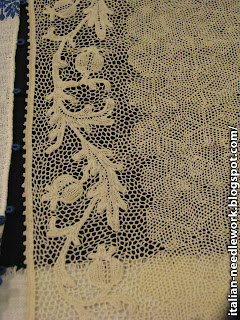 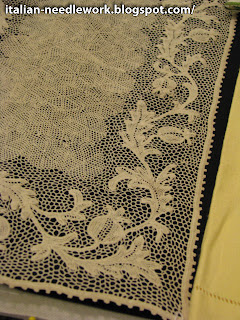 Posted by Jeanine in Canada at 9:44 AM