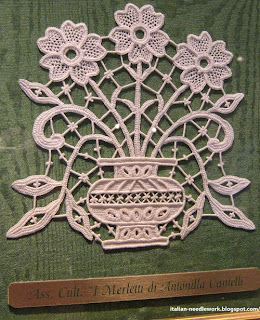 The Cultural Association "I Merletti di Antonilla Cantelli" has given a most wonderful selection of old Aemilia Ars needle lace patterns as a Christmas gift to their readers, students and followers!

This morning I received their newsletter in my inbox and with my heart racing I clicked on the link to read their full letter which tells the story that in the middle of the 1990s, Francesca Ortolani who was part of the religious order of the Sanctuary of Sacro Cuore in Bologna gave to Antonilla Cantelli's students some boxes full of large and small patterns for Aemilia Ars needle lace which had been used by the famous school which was headquartered at the Sacro Cuore beginning in 1912 which taught sewing, embroidery and lace to women.

Antonilla Cantelli being by then (the mid-1990s), a master of Aemilia Ars needle lace had begun her studies at the above-mentioned school which was well and widely known for the high calibre of Aemilia Ars needle lace made there. Antonilla had four students at the time of this wonderful donation from Francesca Ortolani and they were delighted to have their pick from the boxes of hundreds of patterns.

Later, some of the students of Antonilla Cantelli formed the Cultural Association "I Merletti di Antonilla Cantelli" which continues to teach the methods of their master and to ensure that the breathtaking needle lace of Aemilia Ars is not forgotten. It is these ladies who have now decided to share a selection of their old patterns with us as a special Christmas present.

The 10 patterns are downloadable free from their website and have indications written on them (in Italian) for the execution of the lace.

If you should like to pursue Aemilia Ars needle lace but cannot get to Bologna to take classes, the ladies of the Association have published two fantastic books of instructions to help you. One is called "Bordi" [Borders] and one is called "Fiori" [Flowers]. You may still order them from Elena at Italian Needlecrafts until the 27th of December when she closes her shop. Elena also carries the lovely book of patterns and photos of Antonilla Cantelli's work written by her granddaughter Barbara: L'Aemilia Ars di Antonilla Cantelli.

For those of you interested in the history of Aemilia Ars needle lace, the ladies of the Association have begun to post original documents on their website under the "Storia" tab.
Posted by Jeanine in Canada at 9:52 AM