This is the fourth (and final) part of a series written by Silvana Vannini of Italy and translated into English by myself. 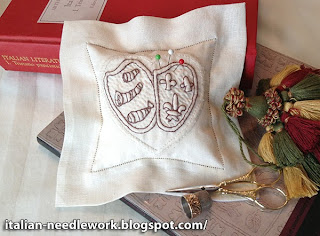 This is the second part of Silvana Vannini's Trapunto project. For materials, the pattern and stitching instructions, please see the project first part.

This second and final part of the instructions for the project will cover the finishing.

Pillow Flange: Fold in from the edge to match up with the withdrawn thread outline around the centre part with the Trapunto and baste. Whipstitch the corner seams closed. Execute the simple hemstitch to secure the flange and remove basting threads. 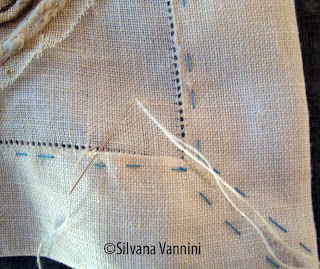 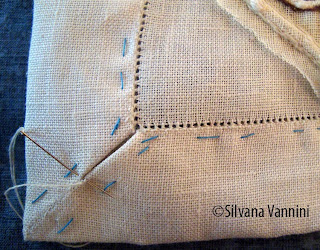 Button flap: Sew the two pieces together with a seam allowance of 1 cm, leaving an opening of about 2.5 cm on one of the long sides in order to turn the piece right-side out. Turn right-side-out, using an awl into the corners if necessary to make a small rectangular piece which should measure 10 cm by 2 cm. Whipstitch the hole closed. Attach the two buttons. Attach the button flap to the embroidered piece on three sides with the simple hemstitch. 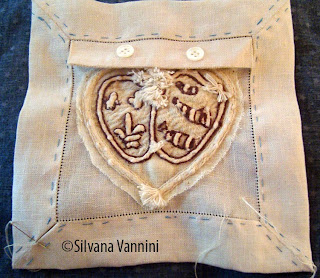 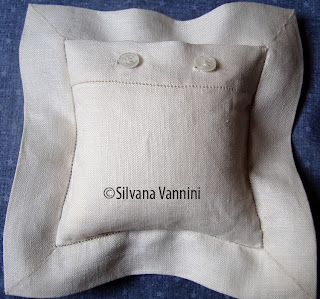 Stuffed cushion: Sew the two pieces together with a seam allowance of 1 cm, leaving an opening of about 2.5 cm on one side. Turn right-side-out, using an awl into the corners if necessary to make a small square cushion. Press. Insert cotton quilt batting into cushion and whipstitch the opening closed. Place inside the embroidered pincushion and use the buttons to close the back.

I hope you have enjoyed this series on Trapunto and the Guicciardini Coverlet by Silvana Vannini, don't forget to pop in and see her reproduction Trapunto coverlet at the Palazzo Davanzati when you are in Florence!

My deepest thanks to Signora Vannini for sharing this incredible experience with us!

About the author:
Silvana Vannini lives in the Tuscan countryside. Now retired, she worked as an instructor of Technical Applications, which in Italy meant, tailoring, sewing, knitting, embroidery, drawn thread work and related activities. Her personal studies in Art History led her to create works of embroidery and painting. 20 years ago she discovered quilting and the perfect medium for expressing herself. She makes small works using many varied techniques like embroidery, appliqué, Florentine Trapunto and others which she also teaches at a few Museums and Foundations. In 2011 she participated in a competition with the theme: The Bag - Necessary Accessory. This led to her selection to participate in the exhibitions which were held for the first time in Florence in Via Toscanella it what was the former studio of the Florentine painter Ottone Rosai (1895-1957), and then in Antwerp, Belgium at the Royal Academy of Fine Arts. She has donated her reproduction of the Guicciardini Coverlet to the Palazzo Davanzati and is presently working on projects for future exhibitions.

Posted by Jeanine in Canada at 1:29 PM