As mentioned in this post, I decided to try to make a tassel from Rosalba Pepi's latest book on Catherine de'Medici Embroidery. Now I'm not going to give away her instructions but I just want to show you another way to achieve knotted tassels which we've discussed before.

So, I've cut a 4m length of 100% cotton Cotone Povero yarn to make the second leg of this tassel. I tied a knot at each end because after all the knotting, the ends tend to become quite unravelled and messy and you lose a lot of your length. Sometimes all you need is just another inch and if it's unravelled and destroyed it can be frustrating. Let's call this long thread the main body thread just because it may become confusing later as to what I'm referring to.

The reason that the main body thread has to be so long is that all those knots upon knots consume a lot of yarn. By the way, kitchen string works nicely if you want to try this method out before investing in some yarn.

Since this tassel requires two legs be made out of the main body thread, I measure out to the half way point (marking it for now with a paper clip) and start a little to the right of it. The centre of the main body thread will, after being folded in half, be where we'll need to attach the "handle" of the tassel so I need to leave a little space for that.

Let me note here that there are no detailed step-by-step instructions in Rosalba's book, so I'm stumbling along on my own. I'm sure there is probably a better way to do this, and it could also be that I'm doing it totally wrong. In other words this is not the authoritative guide to this technique!

The first thing we need to do is make a series of big knots for what will form the head of the tassel.

I made four knots side-by-side

and then made them all into one knot (let's call it a doubled knot).

and tied all four into one tripled knot.

Of course you can go on and on and achieve even bigger knots this way but I stopped here. The resulting tripled knot is an interesting little uneven blob.

On I merrily went attaching other lengths of thread with tripled knots by piercing through the main body thread, making doubled knots on either side of groupings of small knotted lengths like I made here which are attached by threading them on to the main body thread like beads.

Of course I had already trimmed the main body thread and therefore I didn't have enough length to re-tie the ending triple knot again, nor to secure it with another single knot.

Long about this time the tripled knots that I'd made on short lengths of thread and attached by piercing the main body thread also came undone as they didn't have a knot at the end of their lengths to secure them either.

I went back and checked out the first leg that I had completed previously (first photo above) and sure enough all the triple knots at the end of all their lengths came undone easily.

At this point I must confess I threw the whole thing in the stitching garbage can which contains thread and fabric and paper only. Muttering to myself I went off in frustration to do something else. 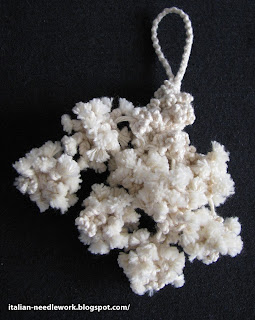 Here it is, I could have left more space between the head and the first part of the skirt and the head itself is quite irregular (Rosalba's is so much better!). All in all, I like it, I would make another one. What do you think?

Posted by Jeanine in Canada at 2:03 PM