In the book Merletti e Ricami della Aemilia Ars (1929) which is a celebration and showcase of the laces made by the Aemilia Ars Society of Bologna in the latter part of the 19th and beginning of the 20th centuries, there are so many incredible laces that one becomes quickly desensitized. You must take each piece and study only that one, every time you open this book in order to appreciate and even to notice how amazing each individual lace is. Every piece represents more than countless hours of painstaking work, every piece reflects the imagination and talent of it's maker and carries the history of Bologna, needle lace and Italy really. Nothing, nothing looks like it. There are other types of needlelaces, and they each have their own styles – not to say that they aren't breathtaking in their own beauty either... but there is some kind of soul in Aemilia Ars lace. If you let yourself really look at it... it is alive. The moveme nt of the designs, the designs themselves – flow somehow. It is difficult to describe how I feel in front of it. Mostly I have to remember to keep my mouth closed as it is frequently opened in awe. My mother's quick backhand is forever imprinted in my brain so I keep my hands firmly clasped behind my back but I lean in very close and try to absorb everything.
Where was I? Oh yes, the book... among the myriad of stunning pieces there is a tablecloth. Such a tablecloth it is! It was called La passeggiata dei pavoni [the promenade of the peacocks] and was executed from a sketch by Alfonso Rubbiani (1848-1913). The centre measured 2.4 x .62 metres and the whole tablecloth including criss-crossing borders wa s 5.2 x 2.2 metres. That's a little more than 17 x 7 feet! Can you imagine producing feet of needlelace?!? The tablecloth was first produced for 'Mr. Vanderbilt and then again for Mr. Bache, both of New York'. It was produced twice.

If I could only study one piece of Aemilia Ars in my life, this is the one. There are 12 peacocks in the centre, 2 fountains, 2 big vases with grotesques and 8 smaller vases containing many types of flowers, leafy branches, pomegranates, acorns, grasses, wheels and picots galore! Flowers my untrained eye recognizes are roses with carnations down the sides... there are many flowers and forms that I have no names for... lozenges, curlicues and even 8 capital Vees (for Vanderbilt, I assume). 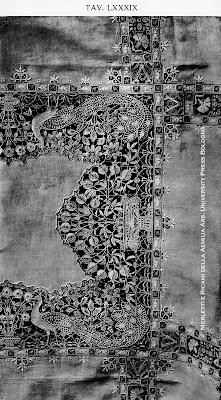 I thought that surely this would be easy to find, being such a thing of beauty, the family members of the Vanderbilts and the Baches would surely have treasured these tablecloths. I embarked on a search. I wrote to all the Vanderbilt museums and after a bit of research I found that Mr. Bache's things eventually came to be the property of the Metropolitan Museum. Not one museum answered my queries. Fair enough, I'm sure there are lots of people doing research and they must be busy. I cannot however get to New York to investigate myself. A very kind woman at the Smithsonian confirmed that they don't have it and she was kind enough to send me photos of what they did have which we'll talk about in another post. I poked around investigating old newspaper clippings regarding the Vanderbilts and found a notice of a devastating fire in which much was lost including "many linens". This makes me just ill to think about. Could this piece of art have been lost to fire? Short of trying to contact Anderson Cooper to see if he or his mother have the tablecloth in the linen closet, I'm out of ideas.

A final note: In the book L'Aemilia Ars di Antonilla Cantelli written by the granddaughter of a master of Aemilia Ars, there is a heartwarming piece. Above the picture of a detail of an Aemilia Ars needlelace peacock surrounded by flowers and in front of a fountain is the following note:
"Grandma I'm getting married and I would like a gift: the promenade of the peacocks." It goes on to say that she (the granddaughter) asked so simply and that her grandmother responded just as simply: You're mad! However, the gift was designed and made by Grandma just the same. I imagine that the granddaughter must have sobbed with joy. The following page in the book shows the newer version of the 'Promenade' – only a touch simpler and no less beautiful – the same size as the original.
Posted by Jeanine in Canada at 2:40 PM