Since I told you about Bricco Embroidery yesterday, it only seems logical to tell you the story of Cavandoli Macramé today.

Valentina Cavandoli was an Italian school teacher who came to be the headmistress of a house for poor and/or orphaned children in Turin around the end of the First World War. Many of the children were the healthy offspring of parents with Tuberculosis. There were many houses who cared for these children but we will concentrate on the Casa del Sole [House of the Sun] directed by this special lady.

The Casa del Sole was a mansion donated by a clothing manufacturer in memory of his daughter. He also donated enough money to build dormitories, a dining room and shower facilities for the 100 children who lived in the home. Children of both sexes were housed between the ages of 3 and 15.

To keep the children busy, Valentina had them create objects in a certain type of Macramé – an art she herself had learned from her great grandmother – which came to be known as Cavandoli. With this technique, the children made accessories for clothing and interior decorating and sold them in charity markets. Each child was assigned a savings book and the money earned from their products was recorded and then given to them upon their leave-taking of the home.

The Casa del Sole survived until 1936 when the political and social situation in Italy became too difficult for the mainly Jewish benefactors of the home.

Valentina Cavandoli died at the age of 97 in 1969, having received a gold medal of recognition for her life's work in 1961.

Cavandoli Macramé is always made of two colours. Each stitch consists of two knots, the pattern is created by inverting the knots. When done in larger pieces, it produces a kind of stiff "fabric", excellent for creating table mats, book covers and borders for pillows, purses, etc. Smaller items can be book marks, eye glasses cases, belts, etc. Patterns for single colour cross stitch or filet lace are suitable to use for this technique.

This is the front of my work in progress made with Pearl Cotton no. 8: 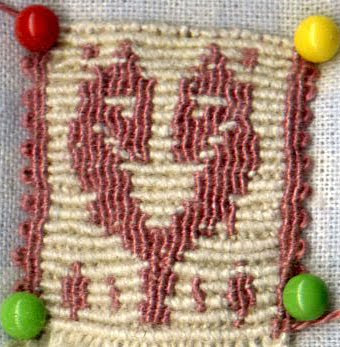 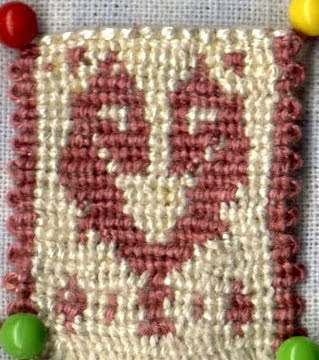 I don't recommend starting your first project with so small a thread – I am having a lot of difficulty keeping the work even!

There is an excellent book on the history and technique of Cavandoli called: Bricco e Cavandoli, due favole in punta d'ago by Gisella Tamagno Gazzola. (Click on the author's name to go to her website where you can see pictures of Cavandoli Macramé.)

To learn more about Cavandoli Macramé, go to Tuttoricamo and look under the 'Techniques' heading. Once there, you can also read a review of the book mentioned above: click on 'Books', then 'Other Italian Techniques'.

The book can be purchased at Tombolo Disegni, click on 'Books', then 'Libri Ricami', then 'Ricamo Italiani'. The book has two subjects, Bricco Embroidery and Cavandoli Macramé and is printed in both languages (Italian and English) together. (You must send an email request to make a purchase.)

The Anchor Manual of Needlework has a whole chapter dedicated to 'Cavandoli Work' with photos and technical instructions.
Posted by Jeanine in Canada at 10:14 AM