Italian needlework samplers are hard to come by. I'm not sure if this is because they were actually used as 'notebooks' in the sense that Italians embroidered samplers of stitches as the only record of the stitches that they were taught and therefore the samplers were handled more and didn't survive the years. This is only a guess. They are not as commonly found as they are in English-speaking countries and usually not framed on the wall like we do.

I found some samplers in my travels to Italy last year, a few were at the Palazzo Davanzati in Florence. A couple of them looked to be mostly cross stitch, one was a darning sampler, the one I looked at the longest was one with various surface stitches and gold thread in one quarter with needle lace and some Macramé around the edges, another quarter of it was all Drawn Thread work. A lot of it was empty space as if it weren't finished – I later recognized this sampler in Elisa Ricci's Old Italian Lace, 1913. (you can find it on page 108 of the pdf file). How I would dearly love to be able to study this sampler up close at length! 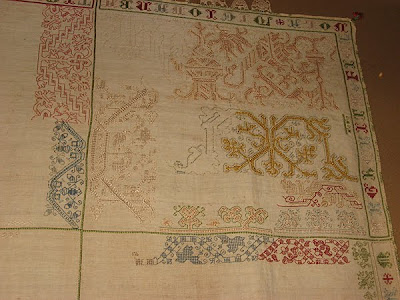 Sorry the photo is blurry, the lighting was very low in this room: 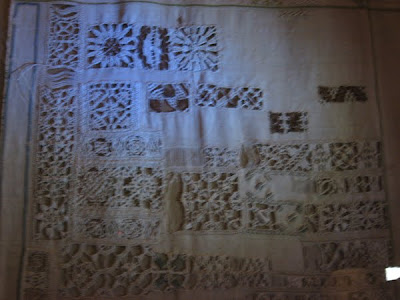 In Verona at the little Don Mazza Museum in Via D.N. Mazza no. 14, there was a delicately stitched sampler done in such tiny stitches on very fine linen. Those bottom letters are made out of eyelets! 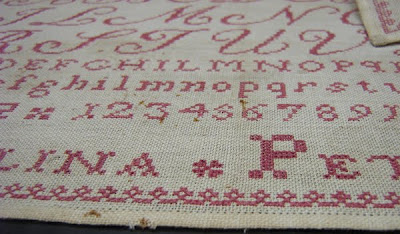 ... we couldn't quite figure out how the cross stitches ended up looking like squares on the back: 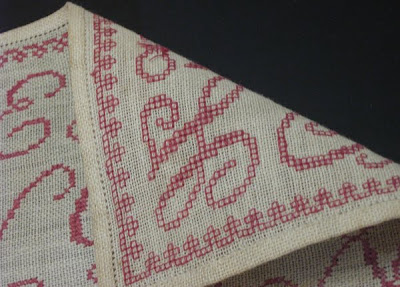 At this museum we also found a long strip of wool done as a knitting sampler (this is only a small part): 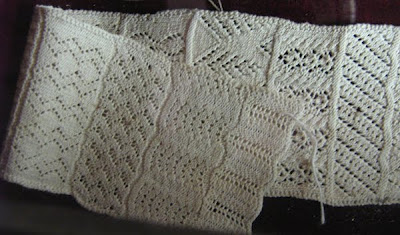 There is a book I'd like to investigate called: Imparaticci = Samplers: Exercises of embroidery of European and American little girls from the seventeenth century to the nineteenth century by Marina Carmignani, 1986 (text in Italian). It's quite expensive so it's just on my wish list for now. Do you have this book? Can you tell me about the Italian samplers in it?

Thank you Armida for your pics of the samplers at the Davanzati Museum, mine did not turn out at all!
Posted by Jeanine in Canada at 7:19 PM