I have been asked to tell you about a project I worked on in 2008. Many of you know (and many of you may not know) that I donate some translation work for the website Tuttoricamo.

In 2008 the Tuttoricamo ladies wanted to put together a book about Italian embroidery with the proceeds going to charity. Simona Bussiglieri from Mani di Donna had already put together a booklet of cross stitch designs in 2007 and was doing the same for 2008.

The ladies from Tuttoricamo sent word around to various embroidery schools asking if anyone would be interested in contributing to this worthy cause. (Proceeds went to the Pediatric Hospital Bambino Gesù of Rome which then used them to help the Bellosquardo House in Rome which houses low-income families from all over Italy and the poorer countries of the world). The response was good and the Tuttoricamo ladies embarked on the daunting task of coordinating and putting together the book: Un Natale da Ricamare 2008 con Tuttoricamo. 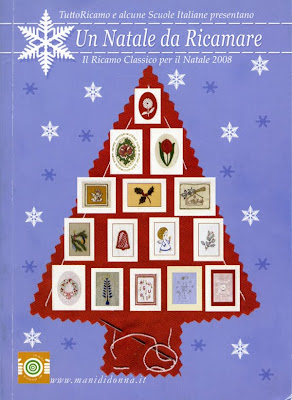 First a bit of background information: in Italy there are many embroidery and lace making schools. They are run by the various masters and teachers of Italian needlework techniques, usually as a second job, as most of you are aware, embroidery doesn't make anyone rich. These schools are generally in competition with each other, each one vying for students, teaching not just one, but many techniques in an effort to attract pupils. Some courses are carried out over weekends, some on specific days of the week, some over a period of weeks, months or years; in churches, community centres, private homes. Some schools and associations are fortunate enough to have some financial backing from community, provincial or regional funds and therefore have a fixed address and classrooms. It is a difficult way to make a living and the competition is quite fierce.

This is the sachet done by Gilda Cefariello Grosso (look her up at Tuttoricamo under 'Prominent Characters'): 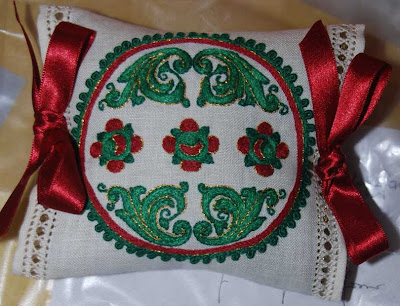 This is the lingerie envelope done by the Association Giaveno Ricama: 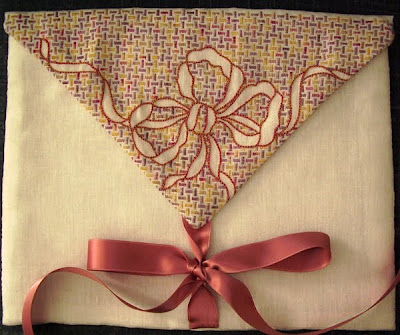 Everyone donated their time, those who drew the patterns and wrote instructions, those who stitched the models, those who photographed, those who coordinated and me, who translated an English version (available as an insert upon request from Mani di Donna). The booklet is not for beginners, it is assumed that you have some working knowledge of the techniques as limits of space prohibited extensive instructions. It wasn't easy and it was stressful as putting together any publication is. Printing deadlines had to be met and asking people who are donating their time to conform to time restraints is not the easiest thing in the world to do. In the end however, a piece of history was made. This book represents more than the good will and charity of embroiderers at Christmas, it represents a sisterhood of sharing the art of Italian needlework and presenting it to the English-speaking world.
Posted by Jeanine in Canada at 12:40 PM