As I am trying to figure out how I can afford to go to the next Italia Invita International Lace and Embroidery Forum in 2011 (they have news on their website about events), I have been writing a series of recaps of the previous Forums in 2003, 2005, 2007 and now 2009.

My digital camera decided not to work the first night so I have no photos of my own. For this Forum I was able to attend as part of Vima deMarchi Micheli's Italia Mia tour. We arrived in Parma the new location of the Forum the night before the event and I saw many familiar faces on the streets of Parma as we did a little sight-seeing.

The theme for the 2009 Forum was "Italian-Style Weddings" and all exhibitors were asked to produce a Bomboniere in their specialty technique.

This is a Sicilian Drawn Thread Work Bomboniere from the Forum 2009 book: 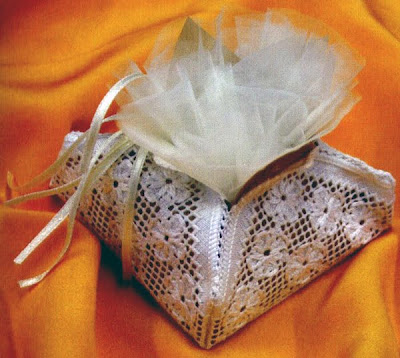 This is a Punto Antico Bomboniere from the Forum 2009 book: 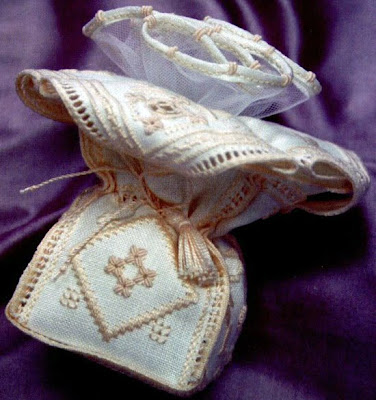 The event was three days, although the first day was restricted to students of the workshops while the public was admitted only on May 9th and 10th. There were 11 workshops which admitted a maximum number of 14 students. Techniques included were: Parma Embroidery, Casalguidi Embroidery, Punto Antico Embroidery, Filet Lace, Aemilia Ars Needle Lace and six courses in Bobbin Laces: Ligurian, Cesena, Rosa del Salento, L'Aquila, Contemporary and Colour Coding designs. You can read more about the workshops here on the old Italia Invita website, most of the links are no longer active but there is still a lot of information on the pages that remain.

The major difference between previous Forums and this one was that the group Italia Invita had turned over the actual running of the Forum to the company Fiere di Parma. Parma is a city of exhibitions and this company specializes in running shows. As the event had become too large for the seven women of Italia Invita to manage, this move was logical. There was quite a bit of talk however among Italians about how Fiere di Parma didn't understand the clientele for this particular show. Our group of North Americans however, enjoyed it immensely.

The atelier mini-workshops were offered as before, although they had been limited to two per person in total – in 2007 you could take two per day, for a total of six. I debated heavily on signing up as I remembered being totally overwhelmed in 2007 and not retaining much. In the end I couldn't pass up the opportunity to try to learn something and attended one on Puncetto and one on Sicilian Drawn Thread Work. I didn't finish either piece and I can't even find them now to scan them for you.

The Forum was situated in one corner of a massive building where an Antiques Market was being held. We had to pass through the Antiques Market to get to the Forum so of course we investigated all the antique embroideries and laces and stitching equipment that we saw along the way.

Once again the Forum was split into two sections, one for Schools and Associations and one for Merchants. There was the display of all the Bomboniere made in the various techniques of embroidery and lace; a display of several bridal bouquets make of flowers and ribbons (embroidered or made of lace); the competition for Italian residents this time was Textile Dominos which were mounted in a wall display; a stand dedicated to Elisa Ricci and the recent reprinting of a collection of antique pattern books complete with modern stitched examples using the antique patterns; 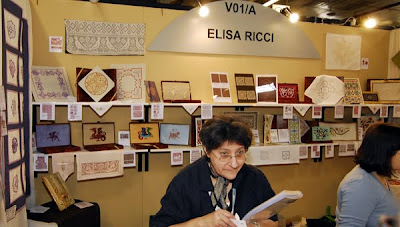 DMC's stand had stitched examples from their antique pattern books and the Encyclopedia of Needlework, they also released a new line of pearl cotton and gave away samples. The new pearl cotton is called Retors d'Alsace [Alsatian Twist] and is a revival of an old product that they used to carry in the later 19th and early 20th centuries. Fratelli Graziano had an interesting display of mannequins at the dinner table all dressed in Graziano linens... 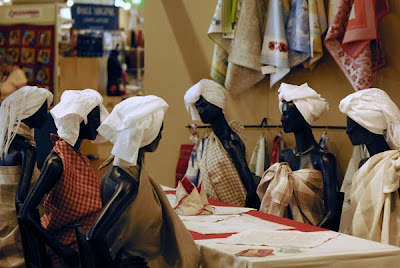 The first day was hot and crowded but everyone's enthusiasm kept us going until we collapsed into bed way past midnight and then got up to do it all over again the next day. The frenzy to see everything was contagious and groups or individuals would meet mid-aisle and grab each other, and literally drag each other off to see something marvelous. I bought without looking. Totally taken up in the conviction that it whatever it was, I needed it and I could look at it later. Even as we gathered to leave, I ran off to buy one last piece of fabric and then had to run to catch up to my group as they were exiting the building. I was sorry that this event wasn't open to the public for three days like the previous one, but then to tell the truth, I couldn't really have fit anything else in my suitcase! This time, instead of leaving clothing behind, I bought a second bag at the outdoor market in Florence which was our next stop on the tour after the Forum.

This edition of the Forum saw over 6,000 visitors. The irony? The Italia Invita Forum occupied a small corner of the building while the Antiques Market occupied the rest of what was a huge pavillion. That weekend the reported number of visitors for the two events combined was over 10,000.

As before there was a book called Merletti e Ricami Italiani Forum 2009 [Italian Laces and Embroideries]. This book has an article on the history of Bomboniere; photos and information on all 63 Bomboniere; and there are also the designs and/or charts for most of them.

Thank you Isabella for the photos of the booths!

Posted by Jeanine in Canada at 3:03 PM