I have been putting off telling you about the Italia Invita Forum because I was waiting for them to release information about the next event. Now that they have, I can tell you about this amazing bi-annual event now held in Parma, Italy and a bit of it's history.

Italia Invita, which means Italy Invites, was started by five Italian women in October of 2001 with the aim of "promoting contact and rapport between the Italian lace and embroidery entities, inheritors of the tradition, and analogous entities abroad". Italy has a long history with embroidery and lace. The idea of Italia Invita was to take from the past and carry into the future the priceless patrimony of Italian needlework; possibly rediscovering techniques which had fallen by the wayside, bringing to light for the world the treasures of Italian textile arts.

These women (Antonia Busi, Fiorella Gaggi, Cristina Notore, Rosalba Pepi and Thessy Schoenholzer Nichols) proposed the ambitious idea of holding a bi-annual event and inviting the world to Italy. The first Forum was to be held May 9th to 11th, 2003 in the town of Bellaria Igea Marina in the north-eastern part of Italy, near Rimini.

When I discovered this, I nearly lost my mind. I had been struggling to find any scrap of information about Italian needlework until then with almost no results. I wanted to drop everything and leave for Italy. I had been at a new job only a few months and had no savings to speak of, certainly nothing that would permit me to risk losing my job or to buy plane tickets. My daughter was 12 and refused to even think of travel... and so I became a voyeur. The internet was all I had and it was still relatively poor in information. I had my subscription to RAKAM, an Italian needlework magazine and I searched for articles about the Forum everywhere, even going to my local library and sitting in the reading lounge pouring over Italian newspapers. I belonged to an Italian cross-stitch message board and read with envy the plans the Italian girls were making to go to the Forum. I begged them all to tell me everything without leaving any small detail out.

The 1st edition of the Italia Invita International Forum of Lace and Embroidery was host to 19 countries, exhibited over 50 needleart techniques and had more than 1500 visitors. It was attended by embroidery and lace schools and associations; there were private collections and over 20 merchant booths selling supplies. The girls of my message board came back with fabulous tales of beautiful techniques, how much they bought, things they'd seen that until then, they had only heard of and they had been able to take workshops on embroidery and lace techniques!

It was at this point in time that I discovered a girl named Agnese who wrote a column for the guide website SuperEva called "Not only cross stitch" (SuperEva is similar to About.com). Agnese listed all the techniques that had been on display at the Forum which I diligently copied down. This gave me a real starting point to target my random searches for information and add to the lists that I had been making from the pages of RAKAM.

It was also from Agnese's column that I learned about the CD-ROM that Italia Invita had made about the Forum. I wrote a letter to them in what I'm sure was terrible Italian asking how I could purchase the CD-ROM.

Here is a scan of the cover art for the CD-ROM: 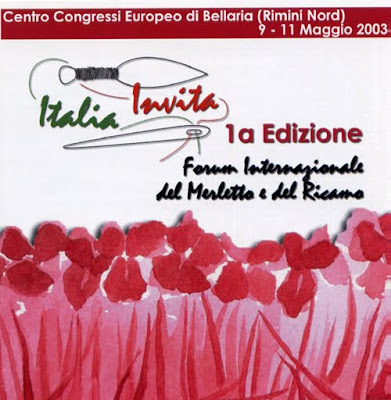 Eventually I sent a money order and the CD-ROM finally arrived after months of waiting, worrying and anticipation... but it was formatted for the PC – I have always had Macintosh computers. When I successfully got my mother to leave her PC I sat down expecting the whole CD to be in Italian but was elated to discover that it was in Italian and English! What a bonus! Not only could I read and understand completely (the CD-ROM was very well translated by Vima deMarchi Micheli, Patricia Girolami and Marina Martin) but now I knew the English words for the Italian techniques, stitches, materials, tools... I now had the names of teachers, schools, associations that I could investigate. Some of the techniques exhibited had a photo, some historical and technical information, not all the works were shown and I found out later that this was because the CD-ROM was produced before the Forum in order to be given out at the event and so the embroideries and laces that were actually exhibited could not be photographed beforehand. Still, this was the mother lode of all finds for me and kept me fascinated for many, many hours. I hung out at my Mom's house quite a lot in those days, stealing every minute that she wasn't at her computer.

There is a French website about lace that made five pages of pictures and reports about the 2003 Forum. You can still see them today. Click on anything in blue with an underline to see other pictures, at the bottom right-hand corner of each page click on "suite" to go to the next page.

Tomorrow we'll talk about the 2005 edition of the Forum...

Posted by Jeanine in Canada at 6:16 PM