As Italia Invita has now announced their plans for the 2011 Forum in Parma, Italy, I've started a series of posts to tell you about this amazing bi-annual event. I started with the first Forum in Bellaria in 2003 here.

For me, the build up to the 2005 Forum was even greater than for 2003. By then I'd joined an Italian embroidery message board frequented by Italian women who were searching for the same information about Italian embroidery and lace techniques that I was! I learned that there wasn't a lot of information about Italian needlework, not even in Italy! Imagine my surprise. It seems that technical instructions were for the most part passed on verbally and that unless you frequented an embroidery school there wasn't any easy way to learn them. Books on technique were scarce. Imagine my surprise too when I discovered that these women who were searching for information were all young. Modern living in Italy, as in most other countries, meant less leisure time for women who were working and so techniques were in danger of being lost as the women of previous generations were literally taking their needlework secrets to the grave.

I joined an embroidery message board but didn't post - yes, I lurked for a whole year! I absorbed everything they learned about the next Forum which was to be held again in Bellaria on May 13th to 15th, 2005. Everyone was very excited about it and there were lots of messages. I also discovered the girl Agnese from SuperEva (see previous post) was now involved in the running of the Forum and she was a member of the message board, so there was lots of reliable information from her. My Italian needlework vocabulary grew as did my desire to go back to Italy. Again, I wanted to go so badly but just couldn't afford it.

For the 2005 edition of the Italia Invita International Forum of Lace and Embroidery the theme was Origins and this peaked my curiosity so much. There was to be historical data about Italian needlework – exactly the stuff I was searching for. All schools and associations exhibiting at the Forum were asked to produce a sample of a Border in the technique of their specialty. There was a competition open to everyone to produce a shoulder bag with the "Original Stitch - Basting" on it. There were special exhibits amongst which were: Byssus, a thread obtained from a Mediterranean sea mollusk; Hemp weaving and a stand dedicated to Elisa Ricci, an Italian needlework scholar from the early 20th century and her publications. There were lectures on the methods of transferring patterns, Elisa Ricci and her work, embroideries and laces from the 16th and today. There were workshops and mini-workshops called ateliers for learning techniques. The Forum had 3500 visitors - a good 2000 more than the 1st edition. It all sounded like a dream come true. I resolved that for the next one, I was going no matter what.

On the message board after the Forum I read about how everyone got to finally meet each other, having previously only known each other through email, how they were all overwhelmed with elation about all they had seen and learned. There had never been so many different Italian needlework techniques, masters, schools and associations together at the same event before. The newly born website Tuttoricamo now had a wealth of information to draw on having made so many contacts at the Forum. ** Update: Tuttoricamo has now changed to blog format, the link has been updated from my original post.

And it got even better... there was a book! ...and it was in Italian AND English! Of course I sent off a money order for it right away. It was a beautiful thing. Merletti e Ricami Italiani Forum 2005 [Italian Laces and Embroideries]. It was full of historical articles, colour photos, a regional breakdown of the techniques exhibited at the Forum with photos of all the Border samples the exhibitors had stitched, stitch diagrams, bibliographies... I had to go to the next one.

I told my daughter that I was going. Period. I told her she was welcome to come and that I'd love to show her some of Italy but I was going in May of 2007 and she had better get used to the idea - we'd work out how to make up the school she'd miss somehow... nothing was going to stop me. I started saving every spare penny.

Here are some sample pages of the book: 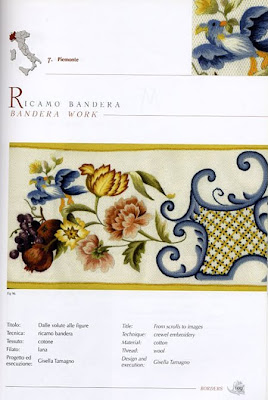 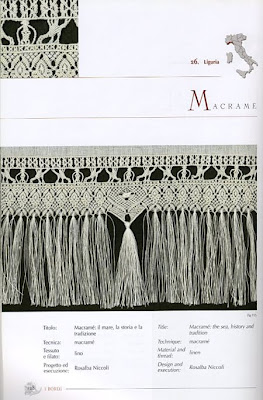 Next we'll talk about the Italia Invita Forum 2007 which I actually got to attend and where I lost my mind...

You can learn more about Byssus at Tuttoricamo, look under the 'Materials' heading for the article entitled: Sea Silk. Information on Elisa Ricci can be found under 'Prominent Characters'.

You can still get the book Merletti e Ricami Italiani Forum 2005. Send an email request to Italian Needlecrafts and ask Elena to get it for you.

Posted by Jeanine in Canada at 8:14 AM