In 1891 in Milan, entrepreneur Prospero Moisè Loria (1814-1892, originally from Mantua) proposed the idea of a Humanitarian Society as he was disturbed by the differences of extreme poverty and extreme wealth of the population in Milan at the time. He offered the city an annuity to set up the society but the idea was rejected. He then left instructions in his will (and 10 million lire!) for it to be realized after his death, hoping for recognition that there was a real need for change in Milan. His descendants contested the will but eventually his dream was realized.

The Humanitarian Society was based in Loria's home and would become one of the most important institutions in Milan. Programs for education and training for employment were carried out and in 1906 and 1909 separate locations were set up for encouraging the skills relating to the Arts and Crafts resulting in 1905 in an embroidery program taught by Adele Sottili (under the name Adele Sottili Calori, she would later publish at least one book: L'arte nei lavori femminili. Cifre monogrammi per ricamo. [Art in feminine works. Monogram Ciphers for Embroidery] - I can find one copy at the Libreria Naturalistica in Bologna if you have a spare 180 euros!) Eugenia Volpi is listed in the Society's archives as an assistant in the festival section of embroidery, 1906-07; Elisa Cantoni is listed as an assistant for courses of design and embroidery in 1915 but I can't find any other information on them.

In 1919 the Humanitarian Society participated in the Esposizione Regionale Lombardia d'Arte Decorativa [Lombardy Regional Exposition for the Decorative Arts] and in the catalogue for the expo there is this needlework: 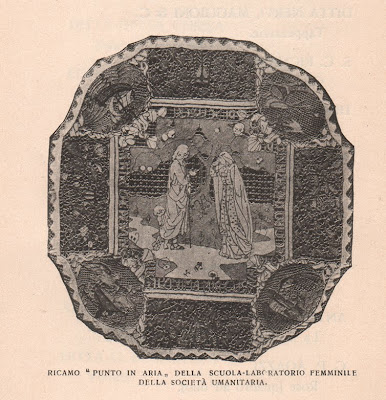 In a 1916 issue of Emporium (Vol. XLIII, n. 254) I found an article by Alfredo Melani with lots of photos of the needlework produced by the Humanitarian Society.

The designs reflect the period and there are many techniques employed, sometimes all on one piece! 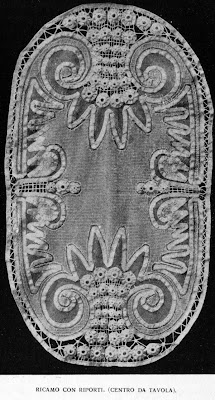 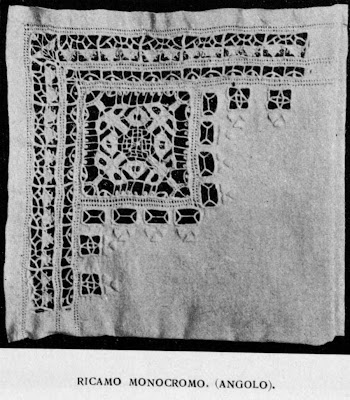 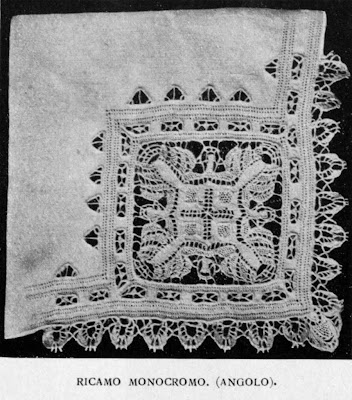 The Emporium article talks of courses in the women's section on embroidering household and personal linens (white on white) and on "luxury" embroideries (using coloured threads), on tailoring and even one on ironing!

The Humanitarian Society was bombarded in 1943-44 and many of the sections including the women's sections were completely destroyed. The courses on sewing and embroidery were not back up and running until 1947. However, the times were changing and by 1965, traditional domestic activities for women were passé and courses in needlework were no longer viable. The Humanitarian Society still runs today with programs in Decorative Arts though I could find no evidence that needlework was among them. Check out their website for lots of information (in Italian).

Special thanks to Claudio from the Ning group MI1906 who brought this bit of Milan's history to my attention and kindly donated the scan from the catalogue!
Posted by Jeanine in Canada at 10:13 AM