I am very pleased to offer you an article that I have translated by Silvana Vannini, an Italian lady who reproduced the Guicciardini Coverlet of Florence. The original coverlet resides in storage at the Bargello Museum in Florence and Signora Vannini's reproduction can be found at the Palazzo Davanzati Museum in Florence.

Signora Vannini has also generously created a Trapunto pincushion project to accompany this article which will be posted separately. To reach more readers, I will also be posting the original article in Italian as quite a number of visits to this blog come from Italy.

The idea of making a copy of the Guicciardini Coverlet was conceived on the occasion of the International Textile Art Exhibition held in Florence, Italy in October of 2006 at the Istituto degli Innocenti [Institute of the Innocents]. The theme of this exhibition invited textile artists to create their own works using the Guicciardini Coverlet for inspiration. At that time, the original Coverlet was being restored by the Opificio delle Pietre Dure [literally: Semi-Precious Stones Workshop. It is a public conservation and restoration institute which also houses archives, a specialist library and a museum of historic pieces of inlaid semi-precious stone artifacts.]. The restoration would be finished in 2010 with an exhibition in Florence at the Palazzo Davanzati where both the original and reproduction coverlets would be exhibited.

The Guicciardini Coverlet or the Usella Coverlet (so called for the name of the area in which it was found) is one of a few amazing works of trapunto surviving from the end of the 14th century. The subject of the coverlet is the legend of “Tristan and Isolde” and it was made in a Sicilian workshop as is evidenced by the Sicilian dialect stitched along the bottom of the coverlet. The coverlet belonged to Count Ferdinando Guicciardini (1845 - 1906) and his wife, the Countess Maddalena Niccolini Guicciardini (1847 - 1916), and was found in their villa in the Tuscan municipality of Usella (about 50 kms north of Florence) in 1890. It was exhibited for a long time at the privilege of the Guicciardini family before being sold for 90,000 Lire (almost $94,000 USD in today’s market) in 1927 to the Bargello National Museum in Florence.

There was another coverlet, also owned by the Guicciardini family, a twin to this one that was sold to the “Kensington Museum of London” (now the Victoria and Albert Museum) in 1904, commonly known as the Tristan Quilt.

These great tapestries were often hung on the walls with the function of dividing large spaces or it is thought that they may have been used as bed curtains.

The 2006 exhibition created the exciting and significant opportunity to enter into relations with the restorers of the original Coverlet which was the spark for making this work so special.

The collaboration with the Opificio delle Pietre Dure allowed access to very detailed information about the origins of the original work.

The photographic documentation made it possible for the artist Marisa Sardini Silvestri to create freehand drawings in the original dimensions which were then traced on to the linen fabric used for the realization of the reproduction.

The research undertaken by the Opificio has determined that the original fabric used was linen, both for the top sheets and those underneath. The linen used for the top sheets has a more dense weave compared to that used underneath. The threads used for the embroidery were a brown-coloured linen for the figures and flowers, while the quilting of the background was done with a linen thread the same colour as the fabric.

The stuffing is cotton wool for the bigger figures while a few of the details of the decorations on the clothing and the horse trappings were stuffed with a slightly twisted cotton thread to give greater emphasis on details and more three-dimensionality.

The philological path undertaken to achieve a faithful reproduction of the Guicciardini Coverlet meant building the copy with the same criterion as the original.

To begin the work meant the quest for materials as similar as possible to those of the original. The careful study had to be made of the original’s technical details such as joining three sheets of 70 cm wide linen together at various stages of the work for each side; observing the simple but effective decoration of the stitches; giving attention to facial expressions and trying to understand how the figures were padded in order to create the same relief effect were the starting points of the project. Given the particularities of the design, it was necessary to prepare the padding of the figures and horses before applying and affixing the backing fabric.

At this point the stitching of the outlines of all the design elements in backstitch using linen thread was started as was done on the original. The letters and the small designs were then padded from the back side of the work by parting the ground fabric threads and inserting the cotton for the padding (cotton wool). The use of cotton wool did not make the coverlet overly heavy, in fact, its weight is about 3.6 kg, the same as the original.  The quilting of the background was done in running stitches and it was necessary for the duration of the entire process to check the photographs of the original for the inclination of the original quilting in order to create the effect of light and shadow. This represented the only significant technical difficulty in the working of the entire project because the inclination of the quilting tends to give a particular balance to the ground threads of the fabric which is especially noticeable when it is exhibited vertically.

A specially designed 2 metre wide frame was made for working this project which was set on sawhorses. The finished dimensions of the work were 2.46 m high by 2.05 m wide. Three sheets of Italian Bellora linen fabric were used per side. The time required for the completion of the work was about 3,600 hours, the amount of thread for the background quilting done in running stitch was about 1.44 metres while for the embroidery of the figures about 3.192 metres of thread were necessary. DMC linen embroidery floss was used. Total cost of materials was approximately 500 euros (just under $700 USD). This data can help in understanding the level of importance that the realization of this project had in my life, an importance which was born the moment that the needle and thread became my brush/pencil/burin. In the figurative description of the story, the expressions, the emotions, the scenes took shape in my hands and mind, I heard the lapping of waves against the ships, the neighing of the horses, the sounds of the trumpets, the clamour of the crowd, and this caused the emotional turmoil that filled the years of work to create an unrepeatable experience.

There is a Trapunto project to accompany this article: Project part one and part two.

About the author:
Silvana Vannini lives in the Tuscan countryside. Now retired, she worked as an instructor of Technical Applications, which in Italy meant, tailoring, sewing, knitting, embroidery, drawn thread work and related activities. Her personal studies in Art History led her to create works of embroidery and painting. 20 years ago she discovered quilting and the perfect medium for expressing herself. She makes small works using many varied techniques like embroidery, appliqué, Florentine Trapunto and others which she also teaches at a few Museums and Foundations. In 2011 she participated in a competition with the theme: The Bag - Necessary Accessory. This led to her selection to participate in the exhibitions which were held for the first time in Florence in Via Toscanella it what was the former studio of the Florentine painter Ottone Rosai (1895-1957), and then in Antwerp, Belgium at the Royal Academy of Fine Arts. She has donated her reproduction of the Guicciardini Coverlet to the Palazzo Davanzati and is presently working on projects for future exhibitions.

On the web:
There is a hidden section on the Bargello National Museum’s website where you can view good close up photos of the original coverlet before the restoration and read details about the restoration process (text in Italian).

The Italian needlework magazine photographer Miky Dessein has posted a video of the interior of the Palazzzo Davanzati during the period of the 2010 exhibition of both the restored Guicciardini Coverlet and the reproduction on YouTube.

Posted by Jeanine in Canada at 5:12 PM No comments:

Puncetto News and a new book!

There is some good news for those of you who have been waiting for the reprinting of the second volume on Puncetto needle lace – copies are now available!

This is really the book you need if you want to get started with Puncetto needle lace. It has a how-to section which gradually instructs you on more and more complicated patterns as well as many patterns for complete pieces. The second printing has been held up for quite a long time and I'm glad to see that everything got worked out and that it is once again available.

The first volume is more advanced and provides patterns and instructions for using multiple colours in designs which are used in the local traditional costumes of this region found in the north of Italy near the Liechtenstein border.


And now there is a third volume by the ladies of the Scuola di Puncetto Valsesiano which is very advanced featuring many different designs (I counted 70!). You can see some of the pages here. There are even some instructions on how to make the buttons found on traditional costume blouse cuffs!

I'm thrilled to see the inclusion of the pattern for the blue gentian flower that was part of the display at the 2011 Italia Invita Forum. There are other flowers and plants as well and rounded edges and motifs like this one from the back cover of the book: 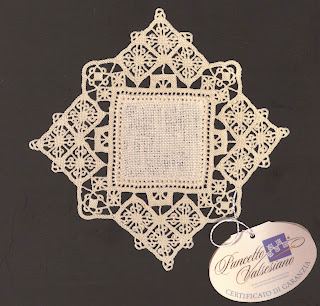 I have been privileged to attend a few workshops with these talented ladies and I dream one day to take a "Puncetto Vacation" which the school offers for a week in August.

Tombolo Disegni tells me that they now have all of these volumes in stock. 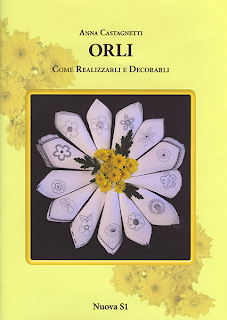 Anna Castagnetti of Ricami a Fili Tesi has been busy! Her latest book is on Hemstitching and is a gold mine of different stitches and edge treatments. 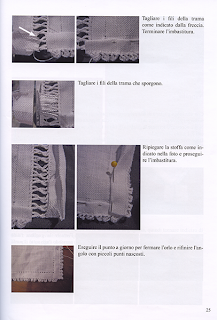 Over 60 pages of closeup step-by-step photos and diagrams make this volume easy to follow even if you don't read Italian.


Anna's good taste and expertise shine though in this volume which, as you can see from the content list above, is very thorough.

In Europe Anna's latest book is available directly from the publisher NuovaS1 via money transfer. Overseas, contact Anna (she speaks English) and she'll let you know how to get it.