Maria Rita Faleri has been hard at work creating a series of books on handmade knotted tassels. In this post I told you a little bit about Maria Rita and since then we have been chatting back and forth during the development of this great series that she has started. As I also wanted to let you know how to get your hands on these books, I have been holding off telling you about them while Maria Rita worked out how people outside of Italy could purchase them easily. She has settled on ebay which seems to work quite nicely. Those of you who are in Italy can contact her through the Esemplario website, set up specifically for this series.

Maria Rita wanted to start this series with the aim of creating step-by-step manuals for these tassels and the knots used to create them in Italian. She felt that there wasn't a lot in the way of instructions for Italians which meant that they had to refer to books in other languages, so the text of these books is in Italian. However, the step-by-step photos mean that those who don't speak Italian can easily understand. I did translate the instructions for the Turk's Head knot and Maria Rita plans to put it on the Esemplario website just as soon as she can.

The first book in the series is about making tassels with the Turk's Head knot (and many variations of it including an elongated one which is quite nice to use as the tassel head): 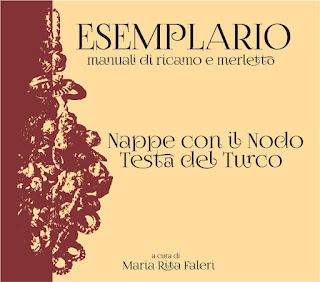 To make the Turk's Head knot, Maria Rita uses the aid of bamboo sticks and I managed to find some double-pointed carbonized bamboo knitting needles on amazon which work very nicely though they are not exactly the same as what Maria Rita uses, they work just fine. Before I found these though, I just used kebab sticks and they worked too, though I got a few splinters.

The second book in the series is about making tassels with the Franciscan Knot and the Simple Knot: 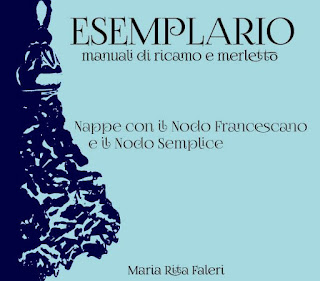 Maria Rita has other plans for this series, not just tassels but embroidery techniques as well. Different projects will be released separately as leaflets or kits using the techniques from the books. I personally can't wait to see them and will let you know when they are available. You can purchase these books from ebay.it searching for object number 131794775737 for the Turk's Head book and object number 131794778449 for the Franciscan Knot book. If you are in Italy, you can contact her via email.

Posted by Jeanine in Canada at 7:38 AM No comments: 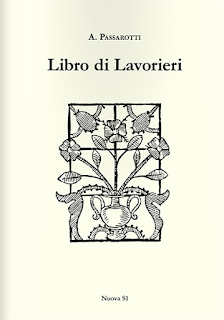 I'm so excited to tell you about a booklet that has just come out. It is a facsimile reprint of a rare 16th century needle lace pattern book currently held in the public library of Forlì, Italy.

Besides 44 plates of needle lace patterns, there is also the story describing the rediscovery of this particular copy and its significance as well as detailed information on the very few other surviving copies. There is some controversy as to the true author of the patterns and the editor of this reprint, Bianca Rosa Bellomo, lays out all the known facts and hypotheses - it is a fascinating read. There are few words about the structure of the designs and then some highlights as to the subject matter of the patterns themselves with respect to the heraldry and symbolism represented. All text is accompanied by precise footnotes and there is a valuable and detailed bibliography for further study. 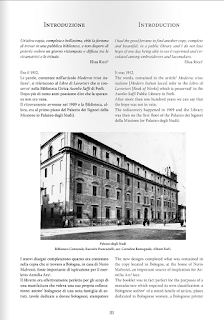 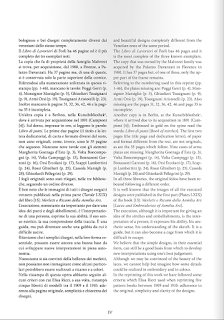 The first plate is a design incorporating the coats of arms of the Gonzaga and Este families as the original pattern book was dedicated to Margherita Gonzaga d'Este (1564-1618) the Duchess of Ferrara at the time.

The booklet is 60 pages and the text is in Italian and English. It can be purchased direct from the publisher, check out their website, they take PayPal. As Lacis in Berkeley, California is their North American distributor, you can contact them to request a copy. Remember that the book was just released in Italy so it may be a little while before it is available on this side of the ocean.

Posted by Jeanine in Canada at 9:41 AM 3 comments: