I really like textured needlework and Parma Embroidery is a very textured technique. The principle stitch is a composition of three parallel rows of Chain Stitches with two rows of Buttonhole Stitches worked over the first and second and second and third Chain Stitch rows with the festoons resting against each other down the middle of the band.

Sound complicated? It's not. 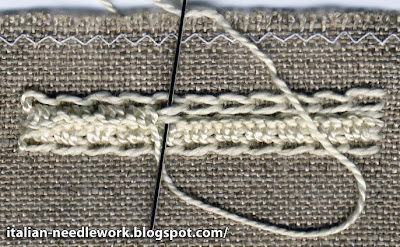 As with any technique however, practice improves stitch tension and curves can be a bit tricky – you will need to compensate in your Chain Stitch rows.

Here are some photos of works from Emporium Magazine, 1926, Vol. LXIII No. 374. Both are cushions: 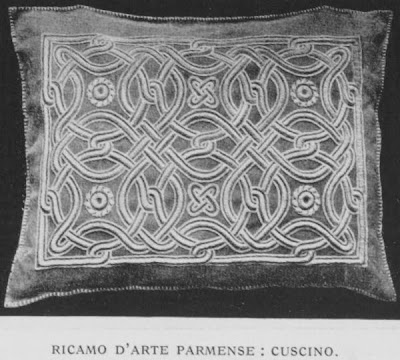 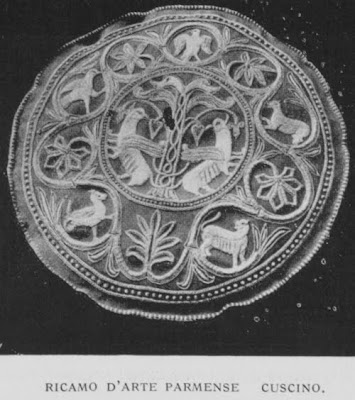 The Patronato dei Lavori Femminili Parmensi (the Society of Parmese Feminine Works) was formed in the early 1920s providing a means of support for the women of Parma through needlework. Under the direction of Bianca Bonfigli Bignotti, the women were set to work embroidering Romanesque designs from local cathedrals, baptisteries, ornate doorways and sculpted friezes.

They chose heavy, natural or undyed linen fabric and natural cotton floche thread and went about "sculpting with the needle". The stitches chosen to best imitate the relief effect of the motifs are attributed to the talents of Irma Lanza Balestrieri.

In 1925 the Society produced a book which was revised and reprinted in 1926 called: Motivi Ornamentali dei Nostri Monumenti Studiati per L'Applicazione al Ricamo (Ornamental Motifs of Our Monuments Studied for the Application of Embroidery).

Parma Embroidery earned a Silver Medallion in Florence in 1925 and a Gold Medallion at the Mostra dell'Artiginato e delle Piccole Industrie di Firenze (Artisan and Small Industries Exhibition of Florence) in 1926.

All traces of the Society are lost after the Second World War but Parma Embroidery is mentioned in needlework manuals produced in the second half of the 20th century. You can even see something in English in the Anchor Manual of Needlework reprinted by Interweave Press in 1990.

Thanks to the extensive research of Manuela Soldi, in 2009 the second edition of Motivi Ornamentali dei Nostri Monumenti Studiati per L'Applicazione al Ricamo was reprinted with a well-documented introduction, some pictorial images from other Italian publications of the epoch and even some technical instructions done by Liliana Babbi Cappelletti. You can get this publication from Elena at Italian Needlecrafts.

Yvette has posted a great picture on her blog of how your curves can look, once you have mastered this stitch!
Posted by Jeanine in Canada at 4:24 PM