The art of embroidered Buratto fabric is ancient in Italy. There was even a pattern book released about 1527 by Alessandro Paganino which you can download at the On-Line Digital Archive: 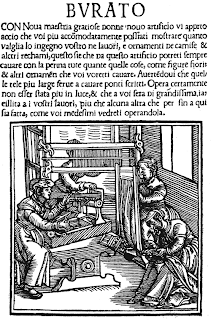 Records of her possessions after her death suggest that the Florentine Queen of France Catherine de Medici herself embroidered on Buratto perhaps bringing it with her from Italy (for more info see my article in Piecework Nov/Dec 2010).

Until quite recently this fabric was only made in a small town in Tuscany using the special ancient loom required to weave it. The art of embroidery on Buratto had all but died out.

On a recent visit to the Fondazione Lisio, I was pleasantly surprized to discover that they had plans to acquire one of these very rare specialized looms and begin to weave Buratto fabric in the ancient style.

This is so new to them that they have not yet had time to translate the page in English on their website, so I'll give you a quick translation of what it says:

"Buratto netting at the Lisio Foundation

Among the reproductions of ancient weaving techniques that the Lisio Foundation boasts in its long history, there is now a new one: Buratto netting.

The term derives from the Latin bura (coarse cloth) and indicates a fabric produced on a loom and consisting of a more or less open weave depending on its intended use as either a sieve used in silk or flour production or, if made ​​with finer threads, as the base for hand embroidery. Evidence of embroidered Buratto dates back to the sixteenth century and to 1527 and the oldest Italian extant book of patterns: The burato: book of embroidery by Alessandro Paganini (ed. Venice, Paganini).

This ancient textile technique of both weaving and embroidery, was revived at the beginning of the twentieth century by the ladies Virginia Nathan and Clara Onori of Antella (a hamlet of Bagno a Ripoli near Florence), founding a school with the aim of providing a source of livelihood which would help relieve the domestic economy of the area.

Today at the Foundation alongside the Jacquard looms on which our master weavers create fine velvets and brocades, there is a loom, just as important as the others, on which Buratto netting is hand woven thus continuing a local tradition that was almost lost."


You can watch a video of how it's made on YouTube.

In 1989, there was a booklet produced to document the recent history of the revival of Buratto embroidery in the early 20th century and the activity it enjoyed throughout the later half of the century called: La Tradizione del Buratto all'Antella [The Tradition of Buratto in Antella]. This book is extremely rare and difficult to find but packed with photos of embroideries of the period including some which were prize winning entries in local exhibitions. It is also a catalogue of the show held in Antella at the time.

It is the most information I've ever seen written on Buratto and it's related history.

Here is a close up of what a piece I have looks like, this was purchased from the Fil-Mec booth at the Italia Invita Forum 2011 and to the best of my knowledge was not woven at the Fondazione Lisio but by a woman in Tuscany working on her own ancient loom. 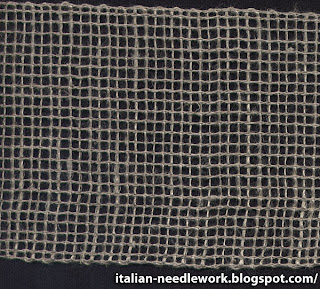 Heartfelt thanks to Ebe Ciampalini Balestri without whom I would never have seen the book described above.
Thank you Giovanna for the heads up!
Posted by Jeanine in Canada at 5:56 PM