Until quite recently it seems, it has been relatively easy to find a wide range of Anchor Threads in Italy.

In 1904 J & P Coats acquired the Italian thread manufacturer Fabbriche Italianne Filati Cucirini which became Cucirini Cantoni Coats. Production was very successful and at the beginning of World War I they had 1000 employees. In 1931 Cucirini Cantoni Coats acquired Industrie Sete Cucirine and became the market leader with their brand "Tre Cerche" [three circles]. In 1993 the company name changed to Coats Cucirini. They have become quite diversified from the early days and now produce and/or distribute products for clothing, footwear and leatherwear as well as threads, zippers and every kind of craft supply and accessory. Their head office is in Milan but the thread has been manufactured just outside of Lucca for over a hundred years.

Rumours of imminent bankruptcy have dogged the company for the past few years. Last year there was some pretty strange colour changes in their pearl cotton line exclusive to Italy called: Ritorto Fiorentino, causing speculation that they were having the threads dyed in Asia. They have undergone some massive restructuring and I assume "closure of the Italian production site with delocalization of supplies" means the manufacturing plant in Lucca but don't quote me on that, I'm speculating too. I have been told by a reliable source however, that some of the thread manufacturing is now done in Hungary.

They have reduced the range of threads in Italy which is all I'm really interested in.

For needle lace there were Coton a Broder numbers like 40, 35, and 30 which were quite easily found... threads which are almost non-existent this side of the Atlantic. Now they are getting harder to find in Italy too. These threads are still listed on their website, but try to find a shop that carries them.

Even Coton a Broder number 25 has been vastly reduced in it's colour range. This weight is not that widely known in North America, but there are some stores that carry it at least in white, ecru and black. I never even knew it came in other colours until I went to Italy!

Since I'm a thread-a-holic I bought myself every colour available from Italian Needlecrafts when Elena got her Coton a Broder no. 25 stock in mid-May. They arrived today! 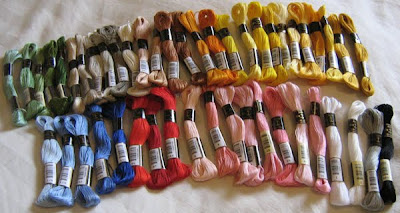 I had to break into them right away to show you the difference between Anchor Embroidery Floss (called Mouliné in Italian), Coton a Broder no. 25 and Ritorto Fiorentino no. 12 (which is like Anchor Pearl Cotton no. 12 - it just comes in huge hanks of 45 grams or on cones!)

The top row is Ritorto Fiorentino no. 12, the middle row is Coton a Broder no. 25 and the bottom is Embroidery Floss. The linen is Sotema 20L - 38 count (an absolute dream!! Shhhh! Let's not awaken the linen-a-holic in me!).

I did some buttonhole stitches: every two holes and then every one; stem stitches with the thread held to the left, running stitches, lazy-daisy stitches, french knots: one wrap, two wraps and three wraps, cross stitches over two and satin stitches. Remember, this is 38ct linen and this kind is quite compact. I did the scan at quite high quality, clicking on it should get you a pretty nice close up.

I thought that for this linen (my preferred count) the Coton a Broder no. 25 was the perfect weight. The Ritorto Fiorentino no. 12 was a bit tight and started to look worn really fast and the Embroidery Floss didn't give me the coverage I like. What do you think? The label says they are colour-fast.

One last thing to note. I already have a skein of Coton a Broder no. 25 - colour no. 131, which I got two years ago. The label says it's made in Italy and the company name is Coats Cucirini, Milan. The skein that arrived today says it's made in Hungary by Coats GmbH, Germany. Hmmmm. This made me check the label of the Anchor Embroidery Floss I have that I got last year from Italy... made in Germany. The Ritorto Fiorentino label says made in Italy by Coats Cucirini but I bought that in 2007.

Notice the colour difference? Its more noticeable in real life but the Italian skein is the one on the left, the colour is richer, slightly darker. 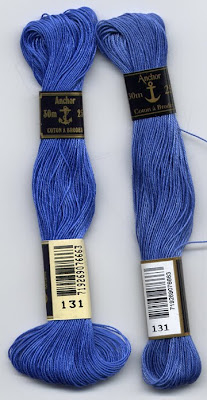 But I'm happy to get it! My daughter is out for the evening, I'm off to catalogue all those new colours!

Oh! I almost forgot... on June 18th there will be a new Punto Antico book available with English and Italian text called: Ciclamino - Oggetti a Punto Antico di Bruna Gubbini. Projects will be smaller items than before. Watch this website for more info!
Posted by Jeanine in Canada at 4:54 PM