In the years before the Second World War three sisters named Nella, Mimi and Marta Sammartini devised an embroidery technique which they named after the area where they lived. The Piave Valley Region lies a bit north of Venice, Italy.

Piave Embroidery is executed on Tulle with diagonal Darning Stitches, Padded Satin Stitches, Rush Stitch and other embroidery and filling stitches and then applied, using Overcast Stitch and Stem Stitch to the backside of Organdy fabric, the very finest transparent cotton. Excess Tulle is cut away around the embroidery and often areas inside the embroidery too. Sometimes secondary layers of Organdy are applied as well to create varying levels of transparency. It is done most often in white on white with 1 to 3 threads of embroidery floss: the incredible transparency of this embroidery makes it perfect for delicate pieces like soft, gauzy curtains, overdresses, veils, and tablecloths.

In 1940 Italian decorator Piero Fornasetti lent his designs to works of Piave Embroidery which were exhibited at the International Exposition of Decorative Arts in Milan. It is not clear if this is one of them, though the information on this photo says that it was exhibited in the same exposition in Milan in 1940. This photo is from the Manuale del Cucito e del Ricamo, 2nd edition. The dress on the figure is in embroidered Tulle, the solid areas are made with multiple layers of Organdy: 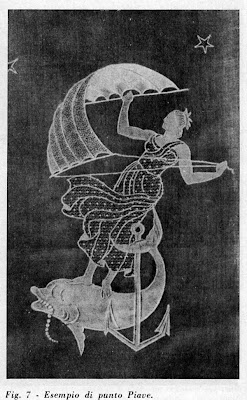 In the late 20th century this lost technique was reborn and brought to life by Silvana De Marchi working with Luisa Cigagna, Doretta Davanzo Poli, Tudy Sammartini, and other descendants of the Sammartini sisters. Antique pieces of Piave Embroidery were recovered from the homes of descendants and used to inspire new designs. Tudy Sammartini remembers her aunts recounting that Marta would design the patterns and Mimi and Nella would embroider them.

Ricamo Italiano, an Italian embroidery magazine, ran a story on the rediscovery of the technique along with modern interpretations which used old designs with coloured embroidery floss in their June 2006 edition.

RAKAM, another Italian embroidery magazine, ran a series of photos of several pieces from the 1930s in their March 2008 issue.

Instructions can also be found in old issues of the Italian needlework magazine Fili: specifically no. 28 from 1936 and no. 37 from 1937.

Tuttoricamo has a brief article under "Techniques" on their website with a link to a free downloadable pattern from the Italian embroidery magazine Ricamo Italiano.

There are a few pages in the Anchor Manual of Needlework (Interweave Press) on Piave Embroidery.
Posted by Jeanine in Canada at 3:38 PM