I have a love-hate relationship with Baroque/Rococo ornament. While some things can be (in my opinion) over-decorated with scrolls and fruit and putti, I find I am always attracted to needlework of this period. I think a lot of it has to do with my love of texture.

Bandera Embroidery from the Piedmont region of Italy has the same effect on me. Sometimes there is absolutely too much ornament but mostly, if it is tastefully done, I love to look at it.

This embroidery style takes its name from the fabric it is stitched on, legend tells that it was first produced in Chieri a small town near Turin at the end of the 16th century. Recent studies however have led scholars to believe the cloth to have Turkish origins and to have already been well-known in the Piedmont region in the latter 15th century.

Today's Bandera fabric is 100% cotton and looks like this: 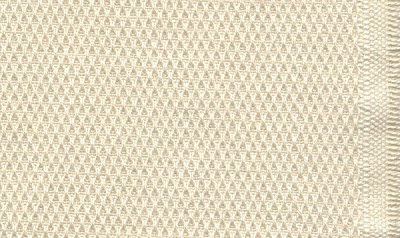 Long before Elena had Italian Needlecrafts in Milan, she hunted down some Bandera fabric and sent it to me. I could not find anything like it around where I live. A lady at a local fabric shop told me to look for Piquet but I never found any of that either, so I can't tell you how similar it is. I believe Elena found it for me at the Canetta store in Milan.

The idea to embroider on this fabric seems to date to the late 17th century, reaching its full height of popularity during the 18th century. Usually done in wool, the embroidery employs the Chain Stitch, Satin Stitch and Padded Satin Stitch, Long and Short Stitch, French Knots and Stem Stitch. Originally executed in one colour of either Savoy Blue or Wine Red, it evolved to include gold-yellow, greens and shades of pink. Wools used recently were DMC Medici Wools but I don't know what they are using now after DMC has discontinued this line.

In later centuries the tradition of this embroidery continued, various workshops were opened and products were made such as slip covers for armchairs and sofas, headboard covers for beds, cushions, bedspreads, tablecloths, footstool covers and curtains taking gold medals for excellence in the various World's Fairs of the day and carrying out commissions for the Italian Royal Family. In recent years it has known a revival, many embroidery schools in Italy, particularly in the Piedmont region teach courses and participate in exhibitions. There are often pictures in the Italian embroidery magazines of Bandera Embroidery.

Anna Ghigo in her booth at the Italia Invita Forum 2007 with all her Bandera Embroidery behind her:

Tuttoricamo has more information about Bandera Embroidery under the "Techniques" heading; under the "Prominent Characters" section you can read about Anna Ghigo, President of the Association Amici del Ricamo Bandera of Chieri - check out her beautiful work!

I have three books on this needlework:

La pittura ad ago in Piemonte - Il "Bandera" by Margherita Goglino, 2002. The text is in Italian though at the back of the book are three pages in English, French and Spanish with a bit of a summary. Lots of pictures of embroideries from private and museum collections, some patterns and stitch diagrams as well as historical info.

Il Mio Bandera by Gisella Tamagno Gazzola, 2007. (click on her name to go to her website and see some of her amazing work) This book is in Italian and English. It has historical info, stitch diagrams, colour photos of embroideries, designs and instructions on how to carry out some elements.

Il Ricamo Bandera, L'arte della pittura ad ago by the Associazione Amici del Ricamo Bandera, 2009. (click on the link to go to their website for some photos and info (some of it in English) This is a small book with lots of colour photos. Most of the text is in Italian but some of the picture captions are in English as well.

The Associazione Tradizioni Piemontesi sells kits for cushions, though you'd have to write to them for prices and forms of payment. The teacher Piera Girardi always has beautiful works displayed at the Italia Invita Forums.

Mani di Fata sells a book of iron-on patterns for Bandera Embroidery with stitch diagrams and ideas for application.

Thanks to Giovanna for the photo!
Posted by Jeanine in Canada at 3:25 PM