A kind gentleman named Claudio over at the MI1906 Milan 1906 World's Fair website has brought to my attention a magazine article he found while looking for something else in a copy of L'Illustrazione Popolare Sunday Edition no. 46 for the 14th of October, 1906 (click on the photo for a closer look): 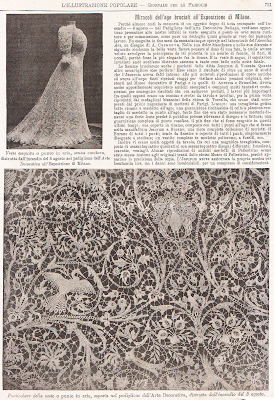 I give you the entire article in Italian for those Italian readers and I will translate it here below for those English-speaking readers.

Unfortunately it corresponds with a photo in Merletti e Ricami della Aemilia Ars (1929). What must have been a completely amazing dress, tragically lost to fire when the Fine Arts Pavillion was consumed by flames on the night of the 2nd-3rd of August, 1906. (Click on the photo for a closer look): 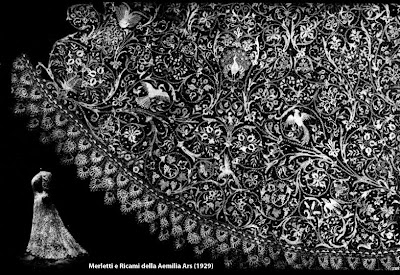 "Dress designed from a sketch by A. Rubbiani by A. Casanova and executed by commission for Signora Marsaglia Balduino (Genoa) in 1905, according to the fashion of the time. There were 15 different kinds of birds among flowers, fruits and ornaments. The hemline was made of individually attached peacock feathers so as to be light and rich at the same time."

The article from L'Illustrazione Popolare reads:

Needlework Miracles burned at the Exposition in Milan

Because at least the memory remains of an object worthy of note lost in the fire – August 3rd – in the Italian Decorative Arts Pavilion, we believe it opportune to present to our readers the gown executed in punto in aria without seams and made on commission, as an almost actual-size detail of the patient work. It was made in two months by sixty-five workers at the Aemilia Ars workshop from a design by A. Casanova. In its sweet whiteness and in its fair and refined richness the beautiful gown made one think of a gift from a fairy who had wanted to wrap up and protect a princess in a cloud of leaves, flowers, birds because she was the most elegant of women. And this dreamy gown, an envied masterpiece was itself destroyed along with many other beautiful things that fateful night.

The flames also burned the laces of the company Jesurum of Venice. So many other wonderful things lost! They were the results of more than a year of study done by Jesurum of the most remarkable reproductions of ancient works and for that purpose many repeated trips were made to visit a few precious originals kept in the Decorative [Arts] Museums of Paris, Antwerp and Brussels. They had also specially bought ancient fragments and made many very expensive attempts to achieve results which are now lost. Among the most important works displayed were a cushion, table centres and doilies, reproduced for the first time from the Byzantine medallions of the church of Torcello, which were bought by the best lace dealer in Paris, Lescure: a Gothic placemat all embroidery and needle lace, a trim rich in a plastron collar [sorry, I don't know what this is!] fan of needlepoint lace, so fine that it was necessary to put a strong lens in front of them so that the public might see the design and workmanship; a complete trim of Rosaline Point, the finest that has been made in recent times; an embroidered blanket, made with all the needle lace stitches manufactured by Jesurum in Burano; a complete rich collection of Burano laces of every stitch; window curtains and covers in every stitch, individually designed and studied; an outfit in coloured lace, bobbin lace, etc.

There were also many items for the table, including a magnificent placemat, composed of sixty-four squares with sixty-four different designs, handkerchiefs, ties, fans. A few reproductions of antique Pellestrina lace were placed together with original pieces from the same Pellestrina museum to show the accuracy of the copy. Jesurum had insured its exhibit for thirty thousand lire, but the damages are, in a complexity of respects, incalculable.
Captions for the L'Illustrazione Popolare photos are as follows:
Photo of dress: Gown executed in punto in aria, without seams, destroyed in the fire at the Decorative Arts Pavilion on the 3rd of August at the Exposition in Milan.

Photo of dress detail: Detail of the gown in punto in aria, exhibited in the Decorative Arts Pavilion, destroyed by the fire of the 3rd of August.

If anyone can tell me about the plastron collar fan - I'd appreciate it!

Many thanks to Claudio for this article!
Posted by Jeanine in Canada at 11:26 AM