Broccatello fabric is very much like Brocade fabric but a little lighter. Large patterns are woven in such a way as to be raised from the background. It can be used in religious vestments or overclothing like jackets and is more commonly today used in furnishings and upholstery.

The centre strip of a 15th-16th century Tuscan chasuable here gives you little bit of an idea of what I mean (click on the picture for a little larger photo). There are also some photos here of Broccatello fabric which is still made today at Ars Regia in Ferrara. Two beautiful Broccatellos woven in Venice at Luigi Bevilacqua can be found by clicking on the word "Catalogue", then "Broccatelles". The best close up I could find is here at the Antico Setificio Fiorentino in Florence.

Punto Broccatello or Bokara Couching is a form of Italian needlework which imitates the effect of Broccatello fabric. In the central rose window design here, you can get an idea of the effect Punto Broccatello imitates, though that photo is of a woven piece. While Bokhara Couching has origins in the Orient, it is probable that it came to Italy through Sicily with traders from the East or Morocco.

Nuova Enciclopedia dei Lavori Femminili by Mani di Fata describes Punto Broccatello as being suited for fabrics such as Organdis and Linen but also for heavy fabrics. The stitch can be executed either in horizontal or vertical lines and is a self-couching stitch with the couching stitches slightly diagonal. The Manuale del Cucito e del Ricamo by Cucirini Cantoni Coats says not to follow the outlines of the design but to fill spaces with rows on the straight of the grain with a distance of two or three ground threads between rows, depending on the density of the weave. 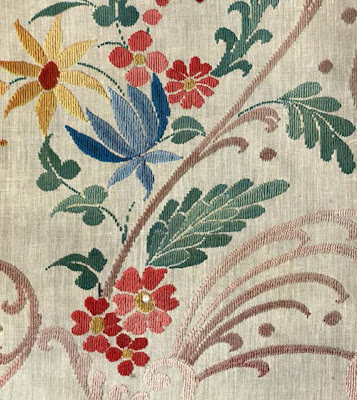 I have two Mani di Fata pattern books for Punto Broccatello. One is just iron-on transfers which indicate where you should place your lines of stitches and the other one is from the 1950s with some photos of stitched pieces as well as traceable designs. I really like it executed on coloured fabric with white thread as shown here. While in Italy last year I saw a lovely pastel green tea service tablecloth from the 1950s which this reminds me of.

I love this purse but unfortunately it is the only pattern that is cut out of the 1950s book that I have: 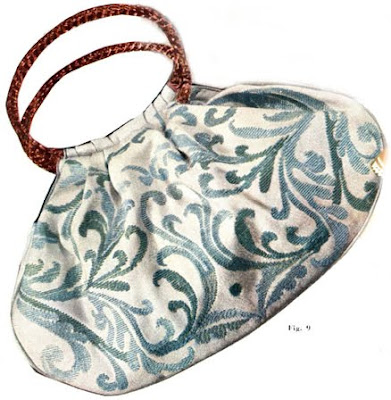 This is how the patterns are drawn, this one is for a towel border:

You should be able to get Mani di Fata Broccatello iron-on transfers from Italian Needlecrafts, though you may have to ask Elena if she can still get them, I didn't see any on the Mani di Fata website – I only got my iron-on pattern book (Disegni Decalcabili - Motivi a P. Broccatello no. 159) a couple of years ago but it could have gone out of print. I believe my copy came from one of the Canetta stores in Milan.
Posted by Jeanine in Canada at 3:46 PM