When I first started collecting printed matter on Italian needlework, of course I looked for material in my own mother tongue. One of the more interesting things I found was Old Italian Patterns for Linen Embroidery by Frieda Lipperheide, (Muster altitalienischer Leinenstickerei in German) translated into English and edited in 1996 by Kathleen Epstein, Curious Works Press.

This is an attractive publication. I can't really call it a book because it is more a collection of folios inserted into a cardboard casing tied together with a ribbon. Very much like the 1897 edition of another publication on German needlework by Frieda Lipperheide that I have. Here we are, 14 years after Ms. Epstein's publication and this volume is difficult but not impossible to find. The Scarlet Letter seems to have it in stock.

Ms. Epstein's text is translated from an 1892 edition. I find it interesting because it has all kinds of patterns for counted thread embroidery with references to pieces which were either in Ms. Lipperheide's (extensive!) collection of from the collections of museums in Hamburg, Berlin, Dresden and Vienna. Also cited are paintings by Da Vinci, Ghirlandaio, Allori, Raphael, Titian and Bronzino.

Ms. Lipperheide believed that Italian embroidery types and patterns descended from Arab influence and many Moroccan stitches and patterns are covered. Her stitch diagrams are good and she often shows the backside. She mentions pattern books by known authors from the 16th century like Mat(t)eo Pagano, Federico Vinciolo and Cesare Vecellio but also one I don't know: Vittorio Serena. There is a good list here of antique pattern books but I don't see him. 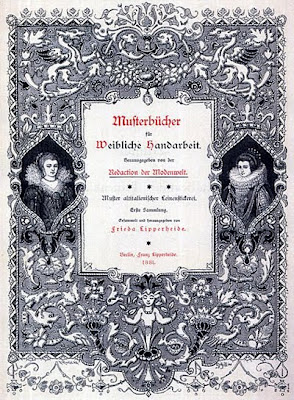 ... which, since I don't speak any German is interesting for the abundance of pictures and diagrams it has... there seem to be many more than there were in Ms. Epstein's later 1892 edition.

I took a look on the World Catalogue website to see just how many editions of this particular title there were (three - 1881, 1883 and 1892) and was amazed at just how much Ms. Lipperheide had produced. Who was this woman? Someone like me – researching the needlework of Italy from afar? I cannot find anything written about her in English though there seems to have been a book written about her in German in 1999 by Adelheid Rasche called: Frieda Lipperheide 1840-1896: ein Leben für Tetilkunst und Mode [a life of textiles and fashion? I'm guessing here with the help of Google translator.] I'm sorry it hasn't been translated into English or Italian.

Can anyone tell me anything about her?

P.S. Many antique pattern books can be downloaded from the On-line Digital Archive of Documents.
Posted by Jeanine in Canada at 4:49 PM