Recently the School-Workshop Punti d'Arte in Città della Pieve, near Perugia, Italy has done some extensive research into this technique. In talking with a Sister of the local Convent of the Poor Clares, some of the history of Perugian Embroidery was discovered and a few ancient examples preserved by the sisters, were viewed.

At least as old as the end of the 18th century, motifs such as stylized animals and fantasy creatures, flowers and volutes, figures and geometrical patterns are worked in Satin Stitches on robust evenweave fabric in single colours such as rust, light brown, red, blue or the particularly characteristic saffron yellow, obtained from crocus flowers grown in the area, fibres are dyed using ancient local recipes.

Perugian Embroidery is a Counted Thread technique and one must decide first how many Satin Stitches to execute for each square of a design, ie. the graphed patterns resemble those prepared in Cross Stitch or Filet Lace and then each square is represented by a group of 4, 5 or 6 Satin Stitches. The Satin Stitches can go over 3, 4 or 5 ground threads. There are also accompanying openwork areas such as Cutwork and Eyelets as well as Bullion Knots and Curl Stitches. 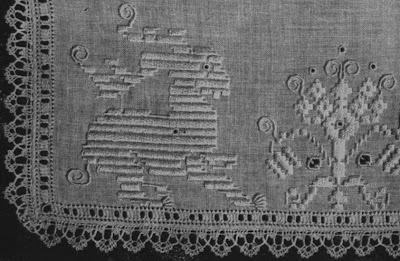 I bought a couple of designs from the Punti d'Arte stand at the Italia Invita 2007 Forum. The girls at the stand were very helpful and told me to use Perle cotton no. 8 for the Satin Stitches and no. 12 for any Cutwork. I did one of the more simple designs on a table runner: 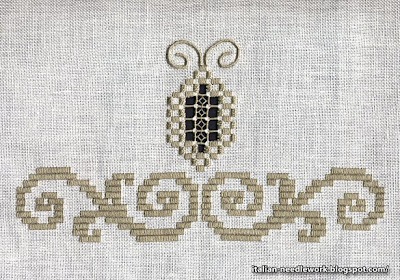 There are some free pattern downloads from the Italian needlework magazine Ricamo Italiano here and here.
Posted by Jeanine in Canada at 5:05 PM