Byssus is produced by a large shellfish found in the Mediterranean Sea called Pinna Noblis. Known also as "fish wool" or "sea silk" this extremely rare and valuable thread is mentioned as far back as biblical times and was produced until the early 20th century. The threat of extinction halted production and now the true Byssus thread is only produced in very small quantities in Sardinia.

Chiara Vigo from Sant'Antioco, Sardinia has sworn an oath to protect and continue the art of Byssus making. She has studied how to collect the Byssus without harming the animal that makes it. She takes her oath very seriously and seeks to safeguard the source of Byssus as well as educate people about it. Much of what she has learned was passed down from her grandmother. 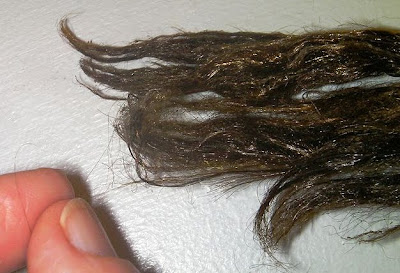 Once the Byssus is brought on land, it is soaked in freshwater for 25 days. This water must be continuously changed day and night until there is no more salt in the water. The Byssus is then left to dry in the shade. When it is completely dry it is cleaned and combed. This process takes several hours and then the filaments are extracted, collected and transferred to a small spindle made of juniper wood, wound on by hand. The Byssus thread is now ready to be handwoven into a piece of fabric mounted on a frame.

There is a 38 minute interview with Chiara Vigo here under the heading: Sant'Antioco, intervista a Vigo Chiara (Video). It is in Italian and Sardinian dialect. If you have the patience however at 29:40 (29 minutes and 40 seconds in) she demonstrates how to make the thread and weave it.

See some of Chiara's works here (click on the photos for a closer look).

Historically Byssus was used largely as accents for ecclesiastical items or for royalty. It was never in mass production to produce items for sale. Sardinia has always woven its Byssus while Taranto used it also for other things like knit fabrics or for embroidery. Taranto, in the south of Italy, produced Byssus in antiquity. The Smithsonian Museum has a Byssus glove probably woven in the late 19th century in Taranto: 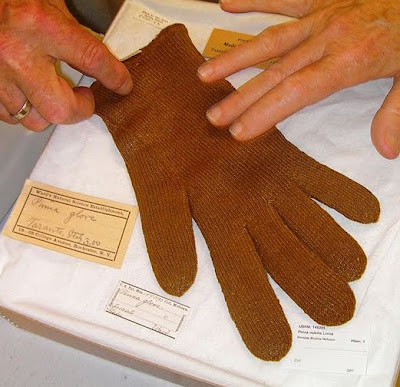 There is an historical article in English with photos here.

Today fabrics are produced in Italy for embroidery which are called Byssus (Bisso in Italian) but they do not contain any of the Pinna Noblis filaments. They are high count linens and quite transparent. Perfect for Shadow work embroidery on curtains!

Images taken from Wikipedia, thanks to John Hill.
Posted by Jeanine in Canada at 2:38 PM