Today is one of the two days in the year that Siena hosts the Palio, a 90 second horserace, held on July 2 and August 16 every year. The Contrada of the Selva won!!! 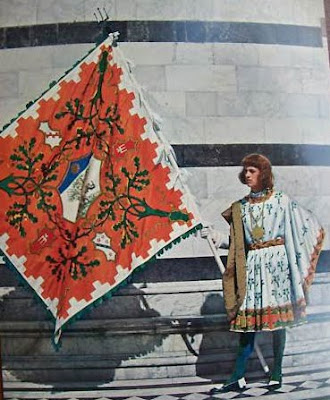 Siena is broken up into 17 Contradas or neighbourhoods. (See my other post for more) When I lived in Siena in 1998 and 1999, my apartment was in the Selva Contrada, my kitchen window faced into the Selva's headquarters and was right above the stall where they kept their horse in the days leading up to the Palio.

The Selva [Forest] is represented on their flag by a rhinoceros under an oak tree and their colours are green and orange. Picture above is an old postcard (1950s?) depicting the costume of the flag bearer [alfieri] and the flag of the Selva. All decoration on the costume would have been needlework and appliqué.

For some more textile-related fun, here is a stamped cotton gown in the Selva's colours (last photo) designed by Emilio Pucci for his 1957 Palio Collection. For this collection, he also created headscarves, men's shirts styled after the Palio jockey's shirts with matching pants, cocktail and formal gowns for women.

Every so often the costumes for the Contrada's Palio activities get redesigned. If you can make an appointment to view the museums of the Contradas (each one has it's own) some have various retired examples on display. Many costumes have silk and goldwork embroidery.

In 1904 Siena hosted the exposition Arte Antica Senese for which all Palio costumes were redesigned for the opening ceremonies inaugurated by the King and Queen of Italy on April 17th of 1904. That year there was an extra Palio race on that day to celebrate.

Here is a commemorative postcard with a depiction of another Contrada's (L'Oca - the Goose) alfiero: 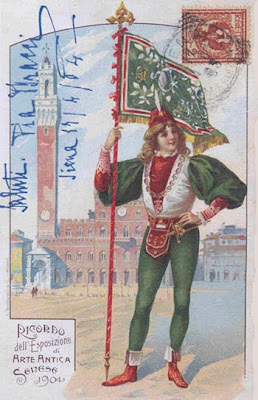 The redesign of the costumes in 1904 was to reflect the Sienese Renaissance years (1450-1520) and was linked to the exhibition which covered Sienese Art between the years of 1250 and 1555.

There are photos of some lace works exhibited in Siena in 1904 in Elisa Ricci's book Old Italian Lace (1913) like this 16th century tablecloth: 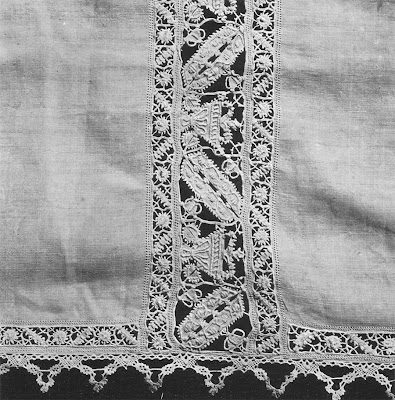 Elisa Ricci wrote an article for the Italian art publication Emporium in August of 1904 on the fabrics and laces of the exposition in Siena. She wrote as only someone who was there could write, full of appreciation and wonder for the beautiful things she saw. She delights in listening to two scholars argue over the age of a particular piece; in the beauty of the works of devotion carefully preserved over centuries; in the luxury of the two-pile velvets and in the early examples of bobbin laces from Milan, Venice and Genoa.

Her particular favourite piece is a collar of needle lace with a musical theme which she speculates must have been destined for a great singer. The lower section is a kind of bas-relief of satyrs and monsters blowing trumpets. The design of this part is attributed to a 16th century artist (not named) and Elisa says that the excellence of execution by the lacemaker challenges the skill of a goldsmith or miniaturist. The middle section holds a row of dancing figures, each enclosed in an architectural niche and dressed in sumptuous Spanish-style dress. In the top points are musical instruments: harps, violas and trumpets in the guise of trophies. "And in the extraordinary minuteness and richness of design, not one line is misplaced, everything is clear, precise, fresh. What eyes, what a needle, what thread, what patience, what love there is in this small masterpiece that has deserved to traverse the centuries, intact in its extreme fragility!"

I wonder where it is today?
Posted by Jeanine in Canada at 5:10 PM