Savignano sul Rubicone (until 1933 called Savignano della Romagna) is located near the north-eastern coastline of Italy, between Ravenna and Rimini. Savignano Braid Embroidery, which originates from this area, was once used to decorate cattle and oxen in local country expositions and fairs - kind of like county fairs as we know them.

Image from Peasant Art in Italy, The Studio Magazine, 1913:

Kind of like the fairs we know, but of course different. The cattle and oxen were paraded along the main routes of the town so the people could admire and appreciate them better. Animals for sale were also dressed to impress. The country folk made covers for their beasts' parade and decorated them with simple yet effective motifs on homespun cloth using cotton, linen, hemp or woolen threads.

In the early years of the 20th century when all over Italy school-workshops were springing up to offer women education and means to support themselves through needlework, Savignano was not excluded. Countess Maria Luisa Rasponi of Ravenna was responsible for the School of Savignano di Romagna where she revived this ancient technique and where reproductions of antique motifs (from antique covers that she was able to recover) were reproduced on tablecloths, bed covers, curtains and other household items.

As part of the Italian Feminine Industries exhibit at the 1906 World's Fair in Milan, Savignano Braid Embroidery was exhibited in a veranda suite (image taken from Elisa Ricci's article in Emporium, July 1907): 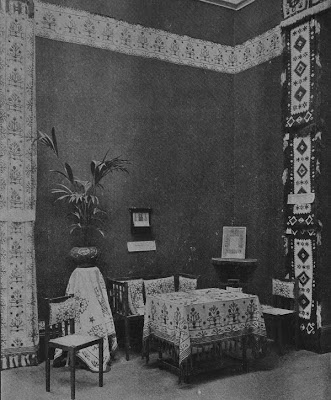 Elisa Ricci included this picture of an oxen cover made by the School of Savignano di Romagna in her article about the Italian Feminine Industries organization written for the magazine Emporium in July 1907: 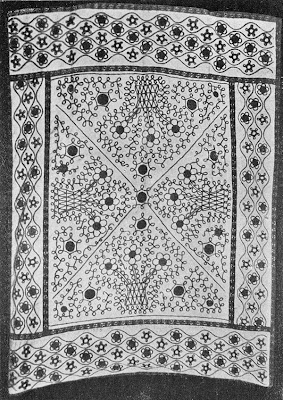 ...and this one in 1913 for her chapter on Women's Crafts in Peasant Art in Italy for The Studio magazine: 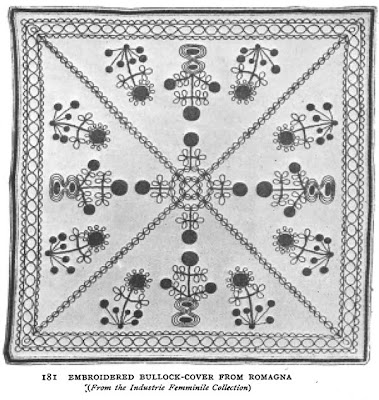 Savignano Braid Embroidery won several awards at various fairs and exhibitions of the period and enjoyed success until the death of the Countess Rasponi in 1919. It is occasionally mentioned in various magazines and exhibition reviews until the early 1940s.

In 2007, acting on information written in the early 20th century, a small group of Italian women went to visit the Romagna Ethnographic Museum of Forlì in the hopes of finding one of the antique oxen covers that the Countess Rasponi had recovered. The tale of their discovery and the history of Savignano Braid Embroidery along with the basic stitches and patterns can be found in the book: Ricami a Treccia di Savignano, 2007 by Bianca Rosa Bellomo, Cristina Notore and Paola Paglierani (text in Italian).

There is a short article (in Italian) with a picture here.

You can download a pdf file of Peasant Art in Italy here (Holme, Charles, The Studio, 1913).
Posted by Jeanine in Canada at 10:46 AM